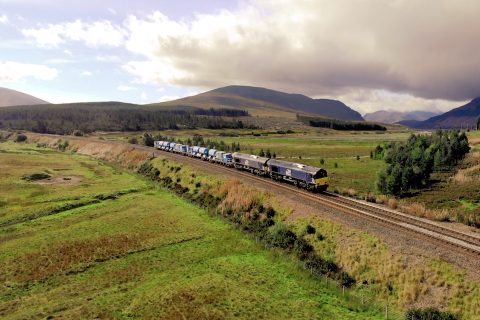 Autumn arrives a little earlier in Scotland than in other parts of the UK. That always makes it the first place to try out the season’s newest techniques for dealing with leaf fall and debris on the rails. Scotland is also the most heavily forested part of the UK, so there is plenty of opportunity to avoid getting the wrong sort of leaves on the line.

Scotland’s Railway, the overarching name for the partnership of agencies that run the railways in Scotland, has launched its autumn treatment programme to remove leaves and debris from the tracks and help keep movements safe on the rails this autumn. Network Rail’s special fleet of leaf-busting trains will operate around-the-clock until December, helping to keep passenger and freight services on the move and reducing delays during this challenging season. Then, as any scot will tell you … there’s winter.

Reaching parts other operators have not reached in a while

Leaves on the line, often trotted out as the railway’s equivalent to black ice on the roads, is a hazard that causes trains to lose their grip on the line and increasing braking distances. With thousands of tonnes of leaves falling onto Scotland’s Railway each year, trains passing over them compress leaves onto damp rails, leaving a slippery black surface which affects train braking.

The seven-strong fleet of specialist rail-head treatment trains (RHTTs) and multi-purpose vehicles (MPVs) use high-pressure water jets to clean tracks before coating them with a special adhesive to improve traction. For the first time, Network Rail will also be running one of these trains to Oban on the West Highland Line. These special trains will be supported by teams of leaf-busting engineers who’ll tackle 78 trouble spots across Scotland.

On the West Highland Line between Glasgow, Fort William and Mallaig, a specially adapted road-rail Land Rover or ‘Sand Rover’ will also be in use, laying traction gel to keep trains moving. “Leaves on the line can pose a real danger to the safe operation of the railway”, said Liam Sumpter, Network Rail route director Scotland. “Every autumn we run a huge operation to treat tracks and keep trains running. Our teams of engineers will be out on the ground around-the-clock and our rail head treatment trains will cover thousands of miles of track as we work hard to keep our customers moving.”

Specialist staff in the railway control room will co-ordinate all these efforts in real-time. Network rail say they’ll use their experience, knowledge and weather forecasts to move resources to where they’re most needed, with intelligence from train drivers, staff on the ground and data from trains also used to great effect. Network Rail has been working together with ScotRail on preparations, with their train fleets also being prepared for autumn. Everything from wheel condition to windscreen wiper blades are inspected proactively.

Below zero all year round

In depots, equipment used to repair wheels damaged by the impact of increased braking has undergone planned maintenance and train wheelsets showing signs of wear were changed during the summer, to avoid unnecessary problems during autumn. “We know few things frustrate customers more than when their train is delayed because of leaves on the line”, said David Simpson, ScotRail Service Delivery Director. “We’ll be working flat out alongside our colleagues at Network Rail out to keep rails and train wheels clean to help minimise the impact the weather has on our customers and ensure they are kept up to date with accurate information about their journeys.”

Wheel slip is a year-round issue in some remote parts of Scotland, particularly on the steep gradients of the Highland Main Line, over Slochd Summit, between Inverness and, ironically enough, the ski resort of Aviemore. With temperatures on the rails often below zero on every night of the year, a crew with another vehicle, not unlike that Sand Rover, applies an adhesive paste to the rails, to assist with traction. Some heavy loco-hauled trains use the line, including the Caledonian Sleeper, and the daily “Tesco Trains” intermodal services for the supermarket chain.