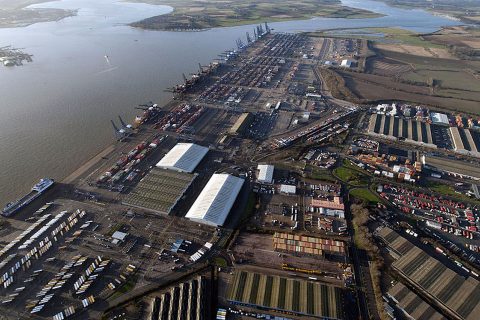 Glasgow headquartered ScottishPower has revealed plans for a hydrogen fuels hub at the Port of Felixstowe. The energy company says it will help decarbonise transport and logistics operations at the UK’s busiest intermodal port. Shipping may benefit most readily, but ScottishPower also propose to fuel rail freight operations, offering an alternative to wiring up the branch line into the port.

The planned production facility could produce up to 40 tonnes of green hydrogen per day. That, say ScottishPower, is enough to power 1300 hydrogen trucks, or deliver 100MW to the national grid, powering everything, including electric trains. The possibility of international export is also being explored. Freeport status at Felixstowe has been a factor in plans for the development.

Rail freight ahead on emissions

Hydrogen power has been on the political agenda for for some time. Rail operations have also been considering utilising hydrogen as an alternative to diesel power. The Scottish government has already put forward plans to use hydrogen for passenger and light logistics operations. in the remoter parts of the country, where full wiring may prove uneconomic.

Road hauliers though will be taking note. Felixstowe still relies to a large extent on trucks for moving containers in and out of the port. A government mandate requiring a net-zero economy by 2050, already has road transport in the spotlight. With rail freight already well ahead on emissions per mile, there is a real urgency to find alternatives for trucks. ScottishPower has pointed out that their plant could provide power for a vast fleet of hydrogen trucks.

Road, rail and industrial use

“This project could unlock nationally significant decarbonisation for the region, as well as playing a role in international markets”, said Barry Carruthers, Hydrogen Director at ScottishPower. “It’s perfectly located not far from our existing and future offshore wind farms in the East Anglia region, and demonstrates how renewable electricity and green hydrogen can now start to help to decarbonise road, rail, shipping and industry.”

Those plans to use green hydrogen for onshore purposes, also gives rise to ideas for the potential to create liquid forms derived from industrial hydrogen production, such as green ammonia or e-methanol. Rail freight has a part to play in distribution. The proposed facility would be situated within the vast intermodal port complex, and moving trains of tanktainers seems a logical move. This could, in turn, provide clean fuels for shipping and aviation, and create opportunities for cost-effective export to international markets.

Large scale production of hydrogen fuels could be the answer for which the rail freight sector has been waiting. The development takes advantage of the government-awarded freeport status to Felixstowe and its cross-harbour sister port at Harwich. The political importance of attracting hi-tech industrial development has not been lost on the elected representatives for the region. “I warmly welcome Hutchison Ports’ and ScottishPower’s joint plans to explore opportunities for a large-scale hydrogen hub at the Port of Felixstowe”, said Dr Therese Coffey, the member of parliament for the constituency. “It’s schemes like this – providing green fuel and investment at the UK’s largest container port – which is crucial for us to reach net zero by 2050.”

Questions remain over whether the energy density of hydrogen power will make it a practical “on-board” solution for main line rail locomotives. However, research continues, and other applications are also being explored, such as shunting and ‘last-mile’ working. Rail freight has already proved ready to embrace and adopt alternative fuels technology, with such developments as HVO fuel being employed by British operators. Hydrogen is likely to be an important part of the mix in the run up to 2050 and beyond. With the Felixstowe project very likely to be green flagged, it may well just be the first of many.

The project aims to continue engineering and site development works to align with customer demand from 2025 onwards.