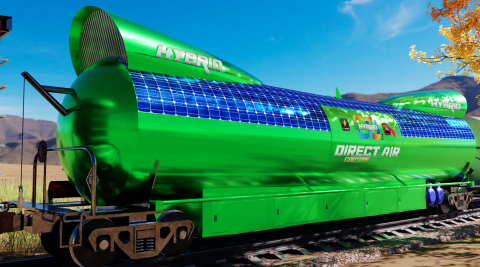 Capturing CO2 from the air while running a train: it could even make a diesel-fueled train nearly carbon-neutral. US-based startup CO2Rail Company, together with researchers from the University of Sheffield, are working to design carbon-capturing equipment that can be used within special rail cars placed in already operational trains.

“This is going to be big, and that’s no hot air”, says the startup CO2Rail Company prominently on their website. They are developing a special rail car that used Direct Air Capture technology, which can be placed within trains, passenger and freight alike.

Founded in 2020, the company plans to begin construction of the first units as early as the first quarter of 2023.  Rail Direct Air Capture is a promising solution to a global climate change crisis, says a recent study carried out by Sheffield University researchers and CO2Rail Company. All methods of carbon capture from the air require substantial amounts of energy to coax the captured CO2 and to regenerate it for use. The energy that is generated when a running train is braking is not harnessed very often at the moment, and this offers potential for the carbon-capture technology to be used on trains.

The company has had meetings with some of the largest rail freight operators, which are enthusiastic about the concept, says Eric Bachman, Chief Technology Officer and Director of CO2Rail Company, to RailTech. They have not yet targeted passenger railways, but expect an even stronger response, as railway companies can offer carbon-neutral or even carbon-negative travel.

“The direct capture of carbon dioxide from the environment is increasingly becoming an urgent necessity to mitigate the worst effects of climate change”, says Peter Styring, Professor at the Department of Chemical and Biological Engineering at the University of Sheffield and co-author of the research. Who pays for the technology can be the government or private industries who take a net zero pledge. More and more companies, like Microsoft, Google parent company Alphabet and Disney say they commit to become carbon-neutral and purchase contracts to offset their emissions for millions of tonnes.

The capture of CO2 from the air is a cyclical process, explains Bachman. It works by using large intakes of air that extend up into the slipstream of the moving train to move ambient air into the large cylindrical CO2 collection chamber. After grabbing air, the air chamber is closed up with hatches, and the desorption process to take the CO2 out of the air is initiated. The air goes through a chemical process that separates the CO2, and the carbon dioxide-free air then travels out of the back or underside of the car, re-entering the atmosphere. After a certain amount of CO2 has been captured, the chamber is closed and the CO2 is collected, concentrated, and stored.

The chamber is designed to collect one day’s worth of CO2, says Bachman. One cycle of capture depends on speed, a faster train absorbs more CO2 and reaches capacity quicker. For a faster train, the air collection takes around 45 minutes, slower trains around an hour or 1.5 hours. The desorption cycle to capture the CO2 takes approximately 5 or 10 minutes. By collecting the air with the speed of the train running, there is no need for the energy-intensive fan systems that are necessary with stationary Direct Air Capture operations.

The air collection chamber takes up 85 percent of theCO2Rail car’s space. The rear 1.5 metres (5 or 6 feet) is a 15 tonne CO2 reservoir. That small reservoir is emptied in a regular CO2 tank car when there is a crew change or fueling stop.

Captured CO2 could be used to carbonate your drink

Each CO2Rail car could remove10 to 20 tonnes of CO2 per day, according to the study. At the higher end, a group of 10 CO2Rail cars can capture the equivalent CO2 emissions of approximately 15,000 automobiles. The CO2 can be reused as feedstock for the production of for example chemicals, polymers, synthetic fuels, refrigerants or carbonated beverages. When carbon capturing will be used on a larger scale, the amount of CO2 will eventually become too much for the circular carbon economy, however.

Then it will be stored deep underground at geological landfill sites. Bachman: “This can be done at for example empty oil wells, it can stay there indefinitely which in a way comes full circle: CO2 came out of those oil wells and is put back in.” Eventually. the carbondioxide will chemically react with minerals underground, and the elements bind to create solid, chalky minerals, locking the CO2 into rock.

Most electric locomotives and most freight and passenger locomotives across the world’s rail network have the ability to convert forward momentum into energy generation when braking to create a frictionless braking force upon the train, says the study. In rail, this is called “dynamic braking”, which helps to slow down the train. The energy is however merely converted into resistance heat and discharged out the top of the locomotive, not making use of its full potential. This is the energy that will power the CO2Rail cars. “Dynamic braking came out in the 1950’s, and for 70 years that energy has been wasted”, says Bachman. Each complete braking manoeuvre produces would produce enough energy to remove over 1.5 tonnes of CO2.

“The number one question we get is: why don’t you use the braking energy for propulsion of the locomotive?”, says Bachman. “And yes, this should have been done 50 years ago, but the Direct Air Capture method we want to implement in rail is calculated to be around five times more effective in carbon mitigation.” The reason for this is when storing the braking energy in a battery for example, energy is lost. With certain newer locomotives, it is also possible to feed this energy back into the electrical grid, called regenerative braking. This lowers railways’ energy consumption, but is currently rarely used.

The research study mentions that in some European countries, such as Switzerland, regenerative braking energy is already resupplied back into the grid. In these regions, a thorough techno-economic assessment and life-cycle analysis would be necessary before the net benefit of the carbon capture technology versus feeding regenerative braking energy back to the grid can be determined.

Freight trains in Europe are a lot shorter than those in North America or Australia, where they can be a kilometre or even longer. The European rail infrastructure is not accommodated to these lengths. Efforts are now made to handle freight trains of 750 metres, which is longer than most current European freight trains. With that in mind, would it make sense to use CO2Rail cars in European freight trains? “What shorter trains lack in weight, they make up in quantity. In North America or Australia there might be four or five CO2Rail cars on a freight train, in Europe perhaps only two, but with twice as many trains to move the same amount of goods. That doesn’t matter for productivity of the system however”, says Bachman to this.

CO2Rail Company will repurpose existing rail tank cars, and aims to start the first cars in 2023. In the US, a one-time recertification needs to be done for the federal rail administration, for which a railroad is lined up to do the testing. Bachman: ”Once that is completed and the kinks are worked out, by 2024 we can start producing on a bigger scale, starting with 5 or 10 wagons”.