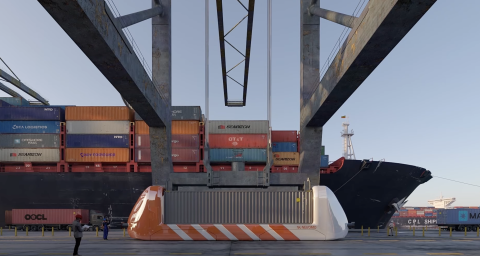 Duisport and Nevomo, a Poland-based rail technology company, partnered up to explore possibilities of using the MagRail concept in the port’s rail operations. The two parties signed an MoU that targets the expansion of the port’s rail freight capacity by using hyperloop-inspired technologies.

“Nevomo’s MagRail technology is a perfect fit for achieving our strategic goals and maximising efficiency at Duisport. Increasing the capacity and flexibility of the existing network by maintaining full interoperability with existing operations is crucial to our business. We are excited to start our cooperation with such an innovative company as Nevomo”, commented Alexander Garbar, head of corporate development and strategy at Duisport.

“MagRail is designed to easily, quickly and cost-effectively extend the capacity and enhance the capability of existing railway lines and improve the efficiency of the rail transportation system”, explained Nevomo. “Linear motor, one of the core subsystems, gives better performance on existing infrastructure without having to carry out lengthy and costly line upgrades. Furthermore, MagRail allows railway vehicles to run powered by electricity on currently non-electrified areas, like terminals and harbours”.

The company’s idea is inspired by the hyperloop technology designed primarily for passenger trains. However, Nevomo found a way to implement it in rail freight too. “The MagRail system is a passive magnetic levitation train operating on existing railway tracks at speeds up to 550 kph. This hybrid solution allows for the functionality of both the MagRail system and conventional trains on the same tracks. Our ultimate goal – hyperloop will require new dedicated infrastructure. It will enable the vehicles to travel at up to 1,200 kph”, emphasised Nevomo.

MagRail is not entirely new in the rail freight market as other companies and rail players have already tested it and approved it. One instance is the Italian rail Infrastructure Manager RFI, said Nevomo.

Duisport is not the first European port attempting to ramp up its rail operations using state-of-the-art technologies. Almost a year ago, the port of Hamburg announced the collaboration with the American company HyperlooTT to develop the HyperPort project. In simple words, HyperPort is meant to deploy the hyperloop technology to transport containers to and from the port, improve seaport-hinterland connections and increase the capacity and efficiency of terminals.

HyperPort will use high-speed capsules to transport containers between ports and inland destinations. Specifically, a transport capsule can accommodate two 20-foot or one 40- or 45-foot container per itinerary. Containers will be loaded vertically in the capsules using an opening on their top part. They will travel at the speed of hundreds of kilometres per hour, making it thus possible to transport up to 2,800 containers a day “in a closed operating environment, without traffic or environmental influences,” said HHLA.