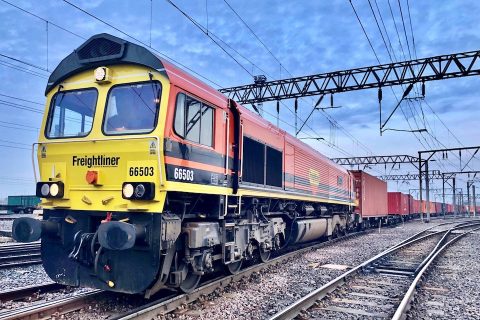 UK operator Freightliner is putting itself forward as the leader in alternative fuels, designed to lower emissions, and accelerate progress towards the government mandated Net Zero economy. The company has embarked on further operational trials, this time with diesel replacement fuel, designated Gd45. The trial is in collaboration with Green Biofuels Ltd (GBF), who supply the branded Shell GTL Fuel, a new cleaner, low carbon formula.

Freightliner, a subsidiary of the American Genesee and Wyoming corporation, is supporting the development of “Gd45  powered by Shell GTL Fuel”, as part of its ongoing commitment to clean air and carbon reduction. Freightliner will be the first to use the product for operational trials. They intend to fuel a selection of their diesel-powered locomotives on revenue-earning services. The company says the upcoming trials are in support of their commitment to enhancing the environmental benefits of rail-freight transportation.

The fuel formula is designed by GBF, the UK’s leading provider of Hydrogenated Vegetable Oil (HVO) and Shell, tackles greenhouse gases and particulate emissions in the rail and road freight industry. According to Freightliner, it provides another new, cleaner fuel solution, The Gd45 branded fuel consists of 55 per cent Shell GTL (gas to liquids) fuel and 45 per cent Gd+ HVO. Hydrogenated Vegetable Oil has already been used on UK freight operations with claims for significant success.

Freightliner is innovating in other areas of operations, in order to claim efficiencies which ultimately benefit the environment. The company has been extensively trialling the fuel on some of its services over recent months in partnership with GBF and Shell. Data collected from the testing shows significant emissions reductions in their diesel engines. The operators has released data pointing to emissions reductions of 84 per cent for methane, 14 per cent for NOx and 18 per cent for ultra-fine particulates when compared to regular diesel.  “There was no performance impact or loss of horsepower”, said a Freightliner statement.

“The substantial carbon and air quality benefits show that this will be an important transitional fuel on the journey to net zero by 2050”, according to Freightliner’s findings statement. “Transitioning across to Gd45 powered by Shell GTL Fuel for diesel services would lower Freightliner’s CO2e emissions by 50 per cent, equivalent to  91,740mt every year.”

“GBF has been fully engaged with the Freightliner team to show the empirical benefits of advanced fuels”, said Magnus Hammick, Chief Operating Officer at Green Biofuels.“ The current energy crisis shows both the resilience of industry to innovate in alternative fuels to decarbonise rail. GTL fuel is a bridging technology that supports the emissions reductions of legacy fleets in the interim period between now and net zero. It’s a way to make an immediate difference today.”