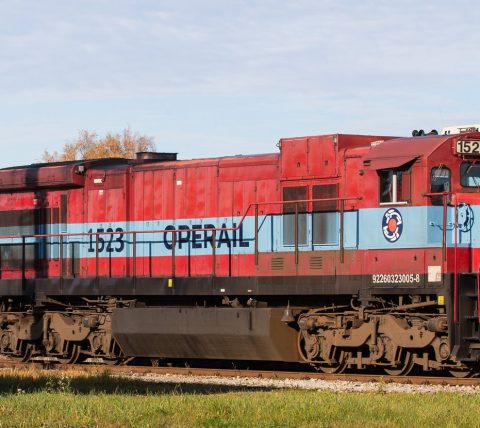 Operail, an international railway logistics company from Estonia, has started conversion for its first LNG freight locomotive last week. The project was delayed due to Covid, and with the new schedule, the LNG locomotive should be completed in spring. The dual-mode locomotive can be powered by Liquid Natural Gas (LNG) as well as diesel at the same time or when LNG runs out.

The first LNG freight locomotive, will save 30 percent on fuel costs, while emitting 20 percent less carbon dioxide and 70 percent less sulphur dioxide. Its construction started last week after the supply difficulties caused by the coronavirus crisis were overcome. “At the end of 2019, we hoped that we would be able to bring the first pilot locomotive to the tracks in 2020, but unfortunately, the emergency situation caused by the coronavirus in Estonia and elsewhere in Europe changed our plans”, says Raul Toomsalu, Chairman of Operail’s Management Board.

According to the new schedule, the construction of the first LNG freight locomotive should be completed in spring. The locomotive will then go through a certification process and be ready for regular service after the approvals of Estonia’s Infrastructure manager Eesti Raudtee and the Consumer Protection and Technical Regulatory Authority.

“As a company, we look forward and know that we will be able to significantly reduce the environmental impact of the transport sector by taking goods from road to rail or using alternative energy sources to transport goods”, says Raul Toomsalu.

The European Commission designated 2021 as the European Year of Rail to promote the use of trains as a sustainable, smart, and safe means of transport. Rail transport will play a very important role in EU’s efforts to become climate-neutral by 2050, as it is one of the most environmentally friendly and energy-efficient modes of transport. “Construction of the first LNG freight locomotive in the Baltics and the near region will support a pan-European trend towards a greener future this year, which will be a significant year for the entire railway sector”, Toomsalu added.

The LNG freight locomotive is built on the basis of the American General Electric C36 locomotive, which is currently in service. “There is no doubt that safety is very important in this project, and the LNG systems are equipped with both electrical, mechanical and manual valves that activate in the event of leaks and temperature changes. The LNG tank also immediately releases all the gas through a separate exhaust pipe should the system record any significant deviation from normal conditions”, confirmed the head of Operail.

During the reconstruction process, the locomotive will be equipped with the necessary LNG systems. The existing fuel tank, which can hold almost 18,000 litres of diesel will be divided into three sections for storing LNG: diesel tanks at the edges and LNG tanks in the middle. This means that the locomotive can run both on diesel and LNG fuel in parallel and is able to run on diesel if LNG runs out. “The locomotive will also have an information system, which will allow us to obtain and analyse all the information concerning energy consumption to further increase fuel efficiency and cost savings”, says Toomsalu.

Operail invests around 250,000 euros in the reconstruction of the first locomotive. “Our goal is to analyse the results after the test period and decide on how many locomotives of the same type to rebuild. In total, we have 30 C36 locomotives in service, and the construction costs of the next locomotives will certainly be lower”, says the Chairman of Operail’s Management Board.

Operail is an Estonian state-owned railway company whose main lines of business are freight transport, repair and construction of locomotives and wagons, and rolling stock rental.