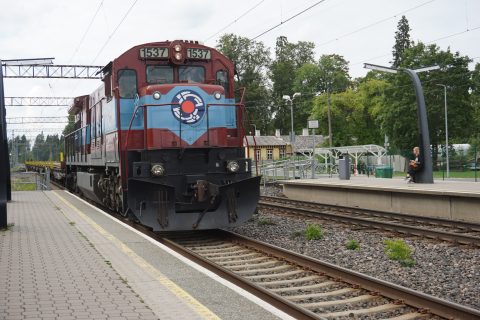 The Estonian state-owned rail freight company Operail will stop transporting cargo originating from Russia or Belarus per 1 January 2023. It made this decision earlier, in May this year, but a transition period was needed to look for alternatives. The operator took the decision as it “strongly condemns Russian aggression and the war in Ukraine”.

The full stop of transport was a topic of debate last week, as the Foreign Minister of Estonia lashed out at the company, saying it did not oblige to the owner’s expectations and has made an unethical choice when transporting Russian nickel. The owner in this case is the state of Estonia.

Operail responds explaining that this is incorrect. All expectations have been met, and Operail has not even transported nickel, a spokesperson told RailFreight.com. “In May it was decided to stop all business related to Russia and Belarus, but to take the necessary time to get there. In December, it was decided that the transition period would end on 1 January 2023.”

“Between May and December, the transport of most Russian goods stopped and we lost 50 per cent of our freight volumes. But some unsanctioned and necessary cargo for western cliends/economies were still transported”, the spokesperson continues.

“We have not transported nickel. Nickel is also one of the goods that is unsanctioned, because western companies and economies need it for battery industry, so in theory it would have been OK to transport this. However, in practice we have not carried out any nickel transportation, as the Finnish company VR has transported all the nickel itself.” As VR will also stop transporting Russian cargo by the end of 2022, the question remains if nickel will be transported to Europe at all.

“We also have to keep in mind that there are parliamentary elections next spring and politicians are eager to be in the picture no matter what”, the spokesperson says. “The owner’s expectations of a state enterprise are not slogans that politicians say in the media, but public signed documents. All of these have been followed.” Operail adds that transit through Russia will continue to serve trade between Europe and Asia, also after 1 January.

The transport volumes of Operail in Estonia and Finland in the first nine months of this year amounted to 5.2 million tonnes. This is 48 per cent less than in the same period of 2021. Over a hundred employees have been laid off due to the decrease in the freight volume.

“The reason for the decrease in the freight volume is the sanctions of Estonia and the European Union against the aggressor countries, which stopped the transit of Russian fertilizers and Belarusian oil products through Estonia”, Operail said. By gradually reducing the transport of goods from Russia instead of ending it abruptly, the company aimed to reduce the related damage.

Operail is also working towards a full stop of its business in Finland. This is to be seen separately from the transport of Russian and Belarusian goods, it points out. “The owner of Operail started the withdrawal process from Finland already in May 2021.”

Operail withdraws from Finland for “reasons of liberal government politics. The Estonian state has no reason for doing business in Finland, this business is appropriate for the private sector”, it said to RailFreigh.com.
The company is now working to sell the business to the private sector in Finland. “We hope to finish the withdrawal in December this year, however, we cannot guarantee it, because the sale is a transaction to be agreed by the seller and the buyer.”