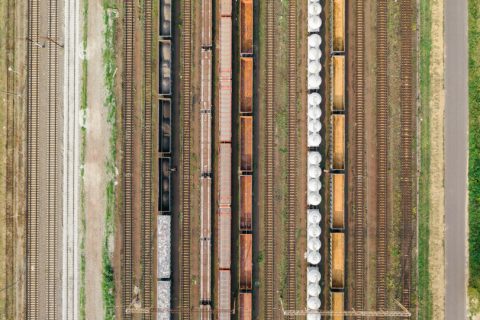 ‘What do European companies need to return to the Silk Road?’

The New Silk Road is still growing, despite a slowdown due to the war in Ukraine. There are strong trends regarding new commodities and traffic between China and Russia is on the rise. However, European companies that were once considered Silk Road pioneers are staying away, leaving Chinese logistics companies wonder how they can het them back on Eurasian trains.

The development of the volumes on the New Silk Road was the theme of the RailFreight webinar ‘The New Silk Road is alive’. Speakers Jet Young (Nurminen Logistics) and Jakub Walczak CH Robinson) illustrated quite an optimistic picture regarding the corridor’s growth. “The growth is not as significant as last year, but it’s there”, said Walczak, who also mentioned that the market should prepare for a spike in demand for Silk Road services in the coming years, just like what happened in 2020.

The growth on the New Silk Road is hard to measure, it there is no consensus on what should be taken into account. While some count the volumes on the main route via Poland/Belarus, others include all corridors. While some measure the volumes between Europe and China alone, others also include traffic between China and Russia.

If you look at the volumes between Europe and China, we should expect a 30 per cent decrease this year, taking into account traffic via the main route via Brest/Malaszewicze, acknowledged Young. This is still the main transit corridor for China-Europe trains. However, for China these declining rail volumes are compensated with China-Russia traffic, which follows a sharp upwards trajectory. Taking into account these figures, the volumes via the main route have increased, although the fugures for the first 9 months of this year are not yet available.

Russian route the bulk of volumes

Apart from this nuance, there is also a clear difference in east- and westbound traffic. Despite big transport and forwarding companies stopping transit via Russia for compliance and ethical reasons, we cannot but notice that the bulk of China-Europe volumes, including New Energy Vehicles and e-commerce, still transit via Russia and, respectively, via Brest/Malaszewicze to Europe, explained Jet Young. Additionally, small and medium-sized companies from Central and Eastern Europe still show a preference for Russian transit options.

In the meantime, large European manufacturers that were once solid New Silk Road customers are staying away from China-Europe rail. They vowed not to use transport solutions that transit through Russia, and as the Middle Corridor via the Caspian Sea is much less attractive in terms of costs and transit time, they now resort to sea shipping, with little sign of returning to rail.

What does Europe need?

Young expressed the Chinese frustration about the European views on the Silk Road. “I had a trip in Europe and talked with many companies who expressed their concerns,” he highlighted. “We still see EU companies refusing the Russian route, with customers mentioning insurance and cargo safety concerns. However, we see that the route runs smoothly with no issues in terms of safety and security. We really need to understand what is the actual concern of European companies”, he concluded.

Answering this question could prove quite complicated. As a result, better communication between Europan and Chinese companies is invaluable in these times. Both Walczak and Young said that the decline in Europe-China volumes should not discourage the market. “We see more preference for LCL than FCL shipments”, said Walczak, quoting the global inflation rates, which also impact the global demand for shipments and trade, not only for rail but other transport modes.

Talking about the more positive trends, Young emphasised that New Energy Vehicles on rail are here to stay. He underlined that their export demand via rail was there for months, and that is why the Chinese government decided to release their transport by trains. The presence of cars on rail could also signal the transport of more dangerous goods on Eurasian tracks, said Walczak, who also mentioned that such developments would occur gradually.

On the other hand, Walczak stressed that the relatively lower volumes and traffic on the Brest/Malaszewicze axis could be a good opportunity for the future. In the context of a possible demand spike in the coming years, Walczak said that it would be wise to undertake modernisation and expansion investments in Malaszewicze to cope with future demand. This relatively quiet period is ideal for such investments despite the lack of EU financial backing.