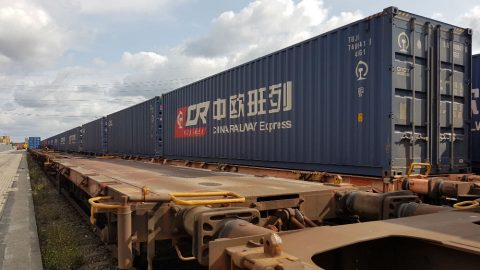 Full to Europe, empty to China; if the container returns at all

This is the view of Yet Young, counsellor for International Affairs at the Eurasia Railway Commission of China Communication and Transportation Association. He will be speaking about this imbalance at the online edition of the European Silk Road Summit, organised on 10-11 November 2020. In this article, he gives a preview of this presentation.

According to the latest data released by the National Railway Group, there were 8,225 China-Europe trains in 2019, including 3,110 trains to Europe and 2,711 to China; 1,118 trains to Russia and 988 trains returning; and 297 trains to Belarus with a single return journey.

In recent years, the National Railway Group and various Chinese cities have successively introduced various policies to encourage the development of return trains. The overall return of trains has developed faster than in previous years. For example, some Chinese platforms have successively started return journeys for the transportation of Russian timber. However, the supply chain organisation of return trains still faces great difficulties.

At present, only from Chinese hubs as Chongqing, Zhengzhou, Xi’an, Hefei, etc., regular train routes are organised to Europe. These are regular and fixed end-to-end operations with weekly shifts. Most of the other train lines are basically in the state of only going and not returning, sending goods only when they are available. The ‘normal’ operation of weekly shifts has not been realised.

According to a Chinese platform on the New Silk Road, the number of trains sent to Europe each week could exceed ten, while the number of trains returning from Europe could be only two or three. The huge imbalance in the number of westbound and eastbound trips is causing huge problems for the operation of the Europe-China train. This starts with the unavailability of rolling stock, but also translates in poor turnover of these units overseas and in result, higher operating costs.

Now, back to the multi-pronged approach. For special trains based on the supply of local manufacturing enterprises in certain inland areas, policies should be formulated to allow each train company to bring back empty containers in time. This would for example concern the Chongqing Hewlett-Packard Export Train, Chengdu Volvo Car Export Train, Hefei Chery Automobile Export Train, etc.

These trains rely on specific equipment such as refrigerated containers, heat preservation containers, internal brackets and fixing supplies. Due to the relatively limited availability of such equipment, the circulation of these trains is particularly important, otherwise it will affect the operation of the outbound train. Therefore, relevant supporting policies should be formulated to support the return of such equipment. For some countries that cannot realise a regular return train, such as Russia, policies should be formulated that allow the return by road, sea, or international transportation.

Moreover, corresponding policies should be formulated to encourage more 40-foot self-powered refrigerated containers to board the China-Europe train. Equipment should be guaranteed for the transport of European fresh food to China, and the development of the China-Europe cold chain train should be promoted. This could increase the number of eastbound trips.

In China, the scale of outbound trains should be appropriately controlled to reduce the number of containers arriving in Europe. Through the subsidy retreat policy, some goods that do not depend on timeliness, are sensitive to freight rates, and low in value are to withdraw from the China-Europe train, and at the same time release valuable financial subsidies and limited transportation capacity to higher value goods such as manufacturing enterprises.

What is more, local governments should be encouraged to break down administrative barriers with China National Railway Group, and strengthen cooperation on the interchange of containers and the improvement of container utilisation. And, various platform companies and China National Railway Group should be encouraged to cooperate with COSCO Shipping and other shipping companies for the return of empty containers. This would especially work in the inland areas of Eastern Europe.

At the national level

Last, at the national level it is necessary to further strengthen its coordination with countries along the New Silk Road, especially Russia. The currently existing mutual trust between the two countries should be used more effectively, in terms of capacity cooperation, relevant market opening, and relaxation of transit trade lists.

This could also be used to strengthen cooperation in customs clearance and other aspects to provide solid support and guarantee for the development of China-Europe Express trains and the expansion of supply channels at the national level.

This article was written by Jet Young. Do you want to hear more from Jet Young? You can register here for the European Silk Road Summit and be part of the conference.

2 comments op “Full to Europe, empty to China; if the container returns at all”

Why not use a smaller version of the SECU-box?
http://advantage-environment.com/transport/secu-box-for-better-utilization-of-load-capacity/

Honestly I really believe that HCI with their renewed 4Fold is the best solution for all on this lane!
For info feel free to get in contact;