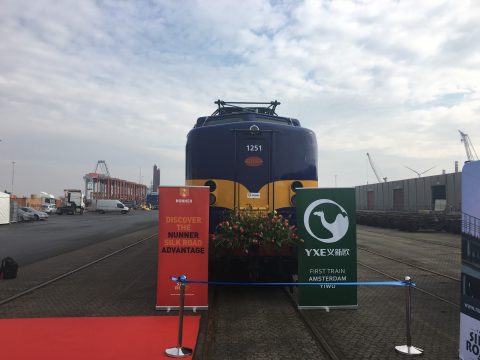 The first direct rail freight link between Amsterdam in the Netherlands and Yiwu in China was officially opened on 7 March. A block train departed from the Port of Amsterdam on its 11,000-kilometer journey through Germany, Poland, Belarus, Russia and Kazakhstan. On 23 March, 16 days after departure, it arrives at its final destination.

The new rail freight service on the New Silk Road is an initiative of Nunner Logistics, TMA Logistics, Port of Amsterdam and Rail Cargo Group. “We are proud to add Amsterdam to our Chinese railway network, in addition to our exisitng conections between China, Russia and Germany. Amsterdam is the largest European port after Rotterdam, Antwerpen and Hamburg, which makes it an important hub. The new connection will make it even easier for operators, retailers and brand manufacturers in the Netherlands to do business with and from China”, Erwin Cootjans, CEO of Nunner Logistics said.

The train service starts as a weekly line but will soon be expanded to a service running two or three times a week. Especially the westbound service is in great demand, said Erik Regter, CEO of Rail Cargo Group. He urged companies that want to book a container in this direction to make reservations five to seven days before the departure date, to avoid dissapointment.

According to Cootjans, the demand for western products in China is also on the rise. Especially electronics, automotive products, beer, baby food and luxurious textile goods are increasing in popularity. Rail freight services in general are also increasing in demand, partly due the fact that deep sea freight sees a longer journey time now that most shippers try to save fuel, Nunner Logistics pointed out.

The Amsterdam-Yiwu train service adds up as the tenth connection between Yiwu and Europe. In total, freight trains between China and Europe have made more than 6,200 trips since 2011. The New Silk Road’s international cross-border rail network has connected 35 Chinese cities with 34 European destinations over the past six years, the Transport Coordinating Committee of China Railway Corporation’s (CRC) China-Europe project reported in January this year.

The Silk Road started out as a network of caravan routes through Central Asia, which was used for many centuries as a trade route between China and East Asia on one side, and the Middle East and Mediterranean on the other. The Silk Road was the main path connecting East and West, China and Europe. The route owes its name to the lucrative silk trade, which emerged during the Han Dynasty between 206 BCE and 220 CE. The new version of the Silk Road is part of China’s ‘One Belt, One Road’ economic programme. The train journey takes 16 to 18 days – almost twice as fast as by ship. Carbon emissions are 20 times lower than those produced by air cargo.

Inspired by the economic potential of the New Silk Road, Poland will host the first RailFreight Summit, organised by RailFreight and Nieuwsblad Transport, on 20-21 March in Wroclaw. High level expert speakers will share their knowledge and experience on the silk road; the route and connections, what it means for supply chains and logistics in general, the risks, the interest of China, what it means for Poland and much more.

Registration is still open! View the programme and book your place now.