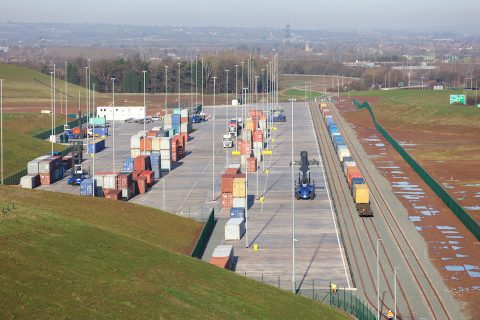 Published on 25-01-2023 at 09:36
Aerial image of a rail freight terminal as imagined by SegroImage by SEGRO media gallery

If Segro, the proposed developers of a redundant airfield, thought their plans to build a rail freight terminal were in the bag, they may have to think again. Despite a string of administrative and legal decisions in their favour, there is still significant local objection to the plan. Residents of the nearest community have formed a new body with the unequivocal title of “Save St Albans: Fight the Freight”. The site is about twenty-five miles (40km) north of London.

There is highly vocal resistance to the proposed logistics hub on the site of the former airfield at Radlett. The opposition group, who appear to be an alias of PSRA: Park Street Residents’ Association, have reiterated their disapproval. There are fears that the rail freight element of the development will not materialise or, at best, lag behind the rest of the development, leading to excessive road traffic in the area.

A massive increase in traffic

Local media says the group wants all legal documents relating to the project released. The group wants particularly to see details of the sale of land by the local authority – Hertfordshire County Council – to the developers. The saga of the troubled development has been dragging on for several years and did appear to be on track to begin. However, at a recent public meeting, a new group was formed to rejoin the resistance.

According to a statement published locally and accredited to the group, “Save St Albans: Fight the Freight” was formed after a public meeting to update residents about the site. The meeting attracted around 300 people. “If the site goes ahead there will be a massive increase in traffic around St Albans, London Colney and Radlett with up to 202 lorries an hour accessing the site”, they say. “That could lead to an extra 2,000 lorries on local roads during the day, with more lorries arriving and departing at night.”

Every likelihood of going ahead

The residents group claim that fresh documents were released last week, regarding the local authority’s decision to sell the land to Segro. They say there are some technicalities which have not been satisfied. However, with the UK government designating the development as a “Strategic Rail Freight Interchange” there seems every likelihood of it going ahead, and the rail terminal being a guaranteed part of that.

However, the group’s website is robust in its refusal to accept that the fight is over. “It is now nearly two years since the decision letter was issued and longer than that since an inspector considered the merits of the proposal”, says the online statement. “In that time much may have changed in terms of the need for a rail freight interchange and the position in terms of the availability of alternatives may be different. The County Council may legitimately look at such matters in its decision making.”