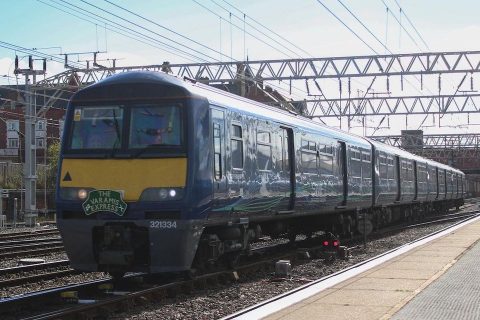 Network Rail jumps on board with express logistics operator Varamis

Published on 23-01-2023 at 09:29
The Varamis Express makes headway under the wiresImage from Network Rail media centre

The British infrastructure agency Network Rail is claiming a share of the laurels for the successful launch of the country’s first independent dedicated express logistics operator, Varamis Rail. The Doncaster-headquartered company has been quietly building operational reliability on its overnight all-electric parcels and light goods service between Birmingham and Glasgow. The company runs repurposed former passenger units and has ambitions to grow its network around Great Britain.

Network Rail has helped clear the way for Varamis to build a robust operation on the already busy West Coast Main Line. After a period of trial operation on Europe’s busiest mixed traffic route, the fledgling operator has redefined and publicly launched its zero carbon freight service. The service lends itself to the growing demand for delivery of fast moving consumer goods.

After almost three months of proving runs between Birmingham International passenger station and Mossend freight terminal near Glasgow, Varamis Rail moved their innovative service to a public launch in the middle of January. The five days a week, Monday to Friday operation, runs in both directions, offering next day delivery, arriving just after midnight in Birmingham and just after six in the morning in Glasgow. Initially, Varamis is targeting express parcels and third-party delivery companies.

The Varamis operation is underscored by industry partners, Eversholt Rail, have converted a number of fully electric four-car trains formerly used in passenger service to enable them to carry freight. Network Rail weighed in with the necessary operating licenses, contracts, and train paths for the service to operate. This followed trial operations, which commenced in October 2022, to test the robustness and practicality of the service, and enabled logistics companies to test the service for themselves.

Varamis secured their operational viability when they received their legal recognition from the Office of Rail and Road (ORR). “I’m delighted that we’ve been able to support the launch of this innovative new service from the latest freight operating company to join the network”, said Georgie Newby, Network Rail’s Senior Commercial and Customer Relationship Manager. “It is the result of hard work and dedication across multiple organisations, all working closely together to deliver a great, zero carbon service for logistics companies to use. We look forward to delivering other innovations to keep growing the amount of parcel logistics transported by rail.”

Varamis has acknowledged the support they have received from the industry at large. “Varamis Rail is incredibly appreciative of the support it has received from Network Rail to enable a start-up of its operations”, said Phil Read, Varamis Rail Managing Director. “We look forward to building on this relationship as the rail industry looks to play its part in decarbonising the UK.”

“As the UK’s newest train operating company, Varamis Rail says it is keen to promote the sustainable benefits that the railway has to offer to the UK economy. “The increase in online shopping and home deliveries over recent years has accelerated the demand to find a more environmentally friendly solutions to moving our parcels, products, or light goods around the UK. along with Network Rail”, explained Phil Read. “One solution is the electrified rail network.”

The new service, which effectively made its second coming on 9 January, emphasises its fully electric credentials. By using repurposed electric units, able to keep up with the one hundred mile per hour (160kph) Lind speeds, Varamis can offer their overnight service, and occupy the available train paths. Network Rail, along with the rest of the rail industry, obviously support the initiative as an environmentally friendly alternative to road haulage. Network Rail has previously examined in detail the possibilities for operating express logistics into the major stations it manages.

Although this inaugural Varamis service operates between Birmingham International, managed by West Coast train operator Avanti, and the freight facility at Mossend International Railfreight Park, there is recognition of the future potential of taking trains directly into major stations. “It gives access to the heart of city centres and is expected to benefit the rail industry in the future as an example of best practice”, says Network Rail.