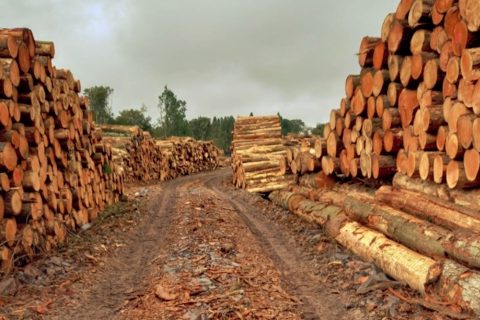 Trees are not just for Christmas, and neither are timber trains. Euroforest, the UK’s largest independent provider of timber harvesting and marketing services, has entered into a long-term modal shift, facilitating the year-round transport of rough timber logs from the Southwest of England. The trees may not be destined for Christmas, but the flow is a welcome present for the rail freight sector.

The coastal resort of Newton Abbot is the origin of rail-borne timber traffic generated by Euroforest clients from operations around the Southwest of England. The relatively short move by rail to Abergavenny in the Welsh country of Monmouthshire is providing a welcome relief for the busy roads in the region. From the Welsh railhead, logs are uplifted by local road carriers and delivered to Pontrilas Sawmill near the border town of Hereford. The trains initially carry around 400 tonnes of timber in each load. The capacity exists to double that to 800 tonnes.

Several trials of moving timber by rail have been undertaken recently. Examples include movements in the far north of Scotland, where temporary facilities were used to move rough timber to a processing mill near Inverness. The success of those trials has prompted interest in regaining timber traffic for rail. Euroforest has previously transported timber from the huge Teigngrace plantation, also nearby Newton Abbot, to a processing mill at Chirk in North Wales.

“Utilising rail creates additional resources for mobilising timber whilst reducing the number of timber lorries on the roads”, says Douglas King, the area manager for Euroforest. “Approximately 400 tonnes of locally grown timber is transported in one journey, a greener alternative to using roads in the long-distance movement of timber. Rail movement is a great addition to the specialist road haulage companies who support our timber movements in the Southwest, allowing us to increase timber mobilisation whilst maximising our clients’ return.”

In his role with Euroforest, Douglas King is responsible for buying timber and planning operations for harvesting sites which are often small volumes and challenging for extraction. Planning efficient haulage is vital to ensure landowners’ timber moves quickly. Sites often have limited stacking space, making the fast movement of large volumes of rough timber an essential part of operations. “Our Devon to Wales [Pontrilas] operation does still involve an element of double handling, adding to the expense”, says Douglas. “If the destination sawmill was rail connected, that expense would be alleviated, adding to the appeal of switching to rail freight.”

There is both political and economic incentive to persevere with the modal shift to rail. “Timber by road is very costly despite the apparent ease of single handling from forest to sawmill”, says Douglas. “It’s not always completely reliable, though. The requirement to contract locally based independent drivers, who are at liberty to pick up work where they choose, makes it difficult to find enough long-distance operators at any one location. Investing in rail lets us try a different model, and while we are still assessing flows between Devon and South Wales, there is promise.”

Organising the movement of around 250,000 tonnes of timber each year is all in the job description for Douglas King. To help in that task, he would like to see rail connections established at processing plants but acknowledges the expense involved. Government support for the modal shift does allow some limited funding for infrastructure, but there is a long list of applicants.“I have invested in rail freight in the past, where the economics did not quite work out for everyone”, he says. “Devon to South Wales has sort of worked out, but it’s not yet confirmed if that would be permanent.”

As a rail freight growth area, the Southwest is looking like an unexpected source. The area has become known for mineral traffic for numerous quarries in Devon and Cornwall, but the possibility of timber traffic using those resources as well could be good news for the sector. The time may be right for rail freight to hug timber extraction.

Frankly, however, regrettably, neither core clients of railways, nor any client, now affords luxury of not bothering about “eta”…
Now, 2023, high quality is requested, and handsomely rewarded – by willingly paying clients…
Low risk supply chains is high quality, supplied at an infrastructure proving resilient, thus complying with current demand.
(“Expected”…, or not, for majority, now the single available device is on road trucks.)