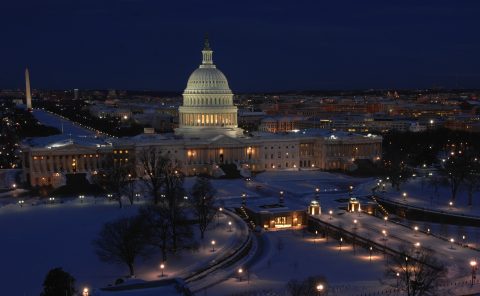 US: rail workers to rally outside Capitol and all around the country

The Transportation Trades Department (TTD) said that rail workers will rally in front of the US Capitol on Tuesday, 13 December, between 1 and 3 pm (GMT -5). The initiative will take place to address the issues within the freight rail industry that are causing general discontent among the workers. More solidarity rallies are scheduled all over the country as well.

The rally in Washington DC is scheduled before two important public hearings, as TTD stated. The first hearing will be in front of the Surface Transportation Board, on 13 December. It will concern “Union Pacific’s refusal to accept goods for shipment because they’ve undermined their own capacity to ship them”. The second one, on 14 December, will be held by the Federal Railroad Administration and it will be about train crew size safety requirements.

TTD is a constitutionally mandated department of the American Federation of Labor and Congress of Industrial Organizations and its purpose is to unify all transportation unions. It currently can count on 37 member unions from all sectors of transportation.

In addition to TTD’s efforts, US members of the House of Representatives and the Senate are coming together in asking President Biden to implement paid sick leave for rail workers. The request was made in the form of a letter signed by 73 lawmakers: 72 democrats plus independent senator Bernie Sanders.

What the politicians are asking in the letter is to include rail carriers in the order establishing paid sick leave for federal contractors signed by Obama in 2015. Rail carriers are not, in fact, included in this policy, despite the fact that the government has hundreds of contracts with them.

What has happened so far?

Negotiations for a new collective agreement between the rail industry and the workers’ unions have started in 2019. Since September, however, the situation has precipitated and led to the US government blocking a nationwide strike. On 15 September, in fact, US President Joe Biden proposed a new agreement that included a 24 per cent wage increase over the next five years. On the other hand, the workers were asking for 15 days of paid sick leave per year.

Four unions out of twelve rejected Biden’s proposal and were threatening to go on indefinite strikes on 5 and 9 December. Negotiations kept on going poorly and a strike seemed behind the corner until US institutions intervened for the first time since 1991. The House of Representatives approved a bill to block the strike on 1 December. The very next day, the bill was signed off by the Senate and turned into law by President Biden.

Senator Bernie Sanders tried to intercede, submitting an amendment that included seven days of paid sick leave. The amendment was approved by the House but did not reach the majority needed in the Senate. In addition, last week, shareholders in two US railway companies demanded to implement paid sick leave as a standard perennial benefit. It remains to be seen whether the involvement of many politicians will now help the workers’ cause.

1 comment op “US: rail workers to rally outside Capitol and all around the country”

A pity it is, but railway industry, devastatingly is “cementing”, at elderly standards.
“BUILD”, FED US device, simply is defensive, etc.
All other modes, those resilient…, upgrade, for lower costs – and accordingly handsomely are rewarded, by willingly paying clients.
(Broken rails, now by far most frequent cause of derailments and “optimal maintenance” tells about an infrastructure, no longer optimal.)
At investments, at reinvestments, etc. the needed upgrading, has to be provided for!