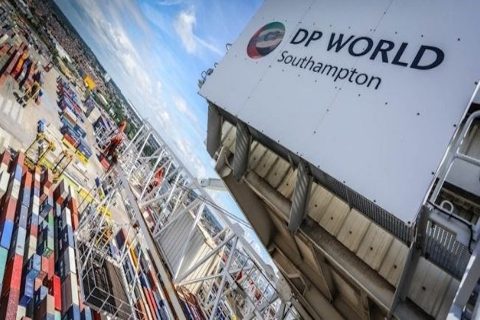 A new intermodal train service connecting port operator DP World’s container terminals at London Gateway and Southampton has been successfully launched. The promoter claims the new service will boost the resilience of customer supply chains. The new route will enable a robust and quick way to switch volumes between the two UK locations. Both sites are designated within the UK Freeports initiative. It’s the first direct rail connection between the company’s two UK ports.

The DP World operated intermodal service, which began with an inaugural run in late November, is scheduled every Saturday, carrying cargo including fresh fruit, beverages and consumer goods. The scheduled roster for the trip is less than five hours. According to the operators, the new train takes up to 120 lorries a week off the roads and cuts carbon emissions by up to eighty per cent. DP World plans to increase the frequency of the train next year.

Rail freight operations have taken a step towards reducing congestion in the South East of England, at the same time as opening up a new corridor between designated freeports. The new intermodal service, linking London Gateway and Southampton, will also allow transfer of sealed consigned transit goods, not subject to much of the administration normally required when entering the UK.

Alongside other recent and ongoing investments in rail connectivity at both ports, this will ease motorway congestion, with a total of 300,000 trucks taken off UK roads each year, according to the operator. “DP World is unique in offering customers a choice of deep-water entry and exit points to and from the UK”, said John Trenchard, UK Commercial and Supply Chain Director for DP World.

DP World is promoting the service as an answer to many of the issues restricting commerce – both at home and globally. “This new rail service will make it easier to switch volumes quickly and easily between the two locations”, noted Trenchard. He added that means greater flexibility and choice. “After the disruption of recent years, shipping lines and cargo owners are looking for capacity, reliability and growth opportunities. We are providing it, enabling customers to move goods smoothly and efficiently in and out of the UK and across their supply chains”, Trenchard added.

The global operator, with ports, terminals and logistics businesses on six continents, runs the advanced logistics hubs at both London Gateway and Southampton. Intermodal operations are favoured by the two deep water ports both having access to rail freight terminals. London Gateway is described by the company as a rapidly expanding logistics park on the doorstep of London. Between the two operations, the ports moved a record volume of cargo in the first half of the year, with a combined total of 1.93m TEU.

Last month, DP World announced the start of construction at London Gateway’s new 350 million pound (417 million euro) fourth berth, which will lift capacity by a third when it opens in 2024. The construction project is supporting 1,000 jobs and the port-centric logistics park will employ a further 12,000 people when it is completed by the end of the decade. The facility will make even more intensive use of the rail network in the east of London.

Freeports are special areas within the UK’s borders where different economic regulations apply. Rail freight facilities have played a significant role in deciding the eight locations chosen to host these special economic areas. All eight sites are in England, with the devolved governments elsewhere in the Uk developing their own arrangements.