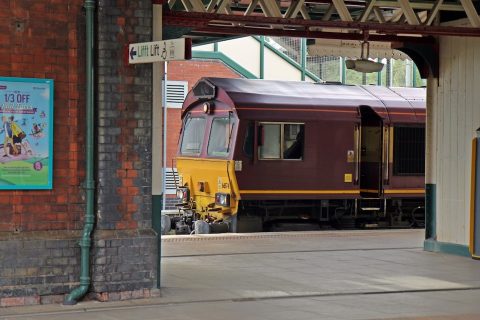 A long-standing dispute between passenger and freight operators, over access to a line between North Wales and The Wirral Penisula in England, has been resolved by the Office of Rail and Road. A ruling means that a compromise has been reached, and most of the ambitions of both Transport for Wales, the passenger authority, and the freight operator GBRf can be accommodated.

The Office of Rail and Road (ORR) has announced its decision to use railway track capacity between Wrexham and Bidston for Transport for Wales Rail Limited (commonly known as TfW) and GB Railfreight Limited (GBRf). This decision will see both more passenger services and greater certainty for freight trains on the line.

Adjudication on the long running dispute over access to the Wrexham and Bidston line has been the subject of much local media attention. The Office of Rail and Road, the appointed body that protects the interests of rail and road users, stepped in after TfW and GBRf could not agree terms. The rail regulator’s independent review was needed because TfW and GBRf, had both applied for capacity that could not be accommodated together.

Currently, Transport for Wales operates an hourly passenger service between Wrexham and Bidston while GB Railfreight services use sections of the track to serve Deeside and Avonmouth from the Padeswood Cement Works. Network Rail’s initial capacity analysis showed that only one of the TfW or GBRf applications could be fully accommodated, so it rejected both. GBRf and TfW then asked ORR to take a decision on the competing applications for access to the line. ORR’s review looked at the line’s capability, operational issues, and a cost-benefit analysis of the proposed services.

The regulator’s decision delivers a positive outcome for passengers with TfW able to run two trains per hour for most of the day. This will provide a step change improvement to the passenger service provision in North Wales. Equally, the decision reflects a positive outcome for freight and the local economy. The freight trains which currently serve Padeswood cement works can now continue with greater certainty because of the firm contractual basis.

ORR notes that each freight train on this line equates to the removal of 36 heavy goods vehicles from the roads, bringing associated environmental benefits to the local area. “We are pleased to have reached a decision that promotes passenger and freight growth in line with our duties through an increase in passenger services and placing the freight trains serving the cement works on a firm contractual basis”, said Stephanie Tobyn, Director of Strategy, Policy and Reform at ORR. “Our review of the applications identified areas where Network Rail needs to improve its management of granting access to the rail network. We will continue to monitor the Wales and Borders route on these issues.”

The additional passenger trains will start running once TfW review and resolve its own operational arrangements. Those include the delivery of new rolling stock, which are currently on order. Currently, TfW operate an hourly passenger service on the Wrexham-Bidston line and GBRf freight services serve the Padeswood Cement Works. TfW wants to increase its services to two trains per hour and GBRf would like to make some temporary rights permanent. Network Rail’s capacity and timetabling work could not fit the freight trains and the extra passenger services on the existing infrastructure. This suggests enhancements are needed to accommodate the applications.

The ORR ruling directs the approval of three firm contractual rights for GBRf to operate trains at the time slots requested. It also directs that TfW is granted twenty four of the additional twenty six rights for which it applied, enabling an increase in passenger service levels. The two rights not granted to TfW are those which clash with the current freight services.