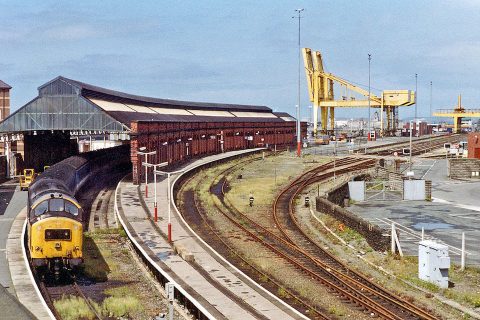 Freeport bid coming down the line for North Wales

Published on 06-12-2022 at 06:15
Holyhead railway station exterior and harbour sidings in 1993Image from Geograph UK WikiCommons and by Ben Brooksbank

Ferry and logistics operator Stena Line has partnered with Anglesey County Council, the local government body, and announced a bid to bring a Freeport to North Wales. The partnership intend to submit a major freeport bid, which they say will bring prosperity and an economic boost to the region. As well as Holyhead port, Stena Line has invested in a major 213-acre site, and is considering a number of sites across the Welsh island. The partners say the proposals will lead to wide-ranging benefits for many parts of the region’s economy.

The formal freeport bid will shortly be submitted to the UK and Welsh governments. There are already discussions underway with major businesses and institutions who are supporting the bid and are interested in bringing investment to the freeport. The major port on the island, which is actually on the spur island of Holyhead, is part of the bid and is already rail connected. There are also current calls for the reinstatement of a line to the north of Anglesey, terminating at the town of Amlwch, which also has a small harbour with moribund rail facilities.

Stena Line is pledging a major foreign investment in Holyhead Port, which is the second largest roll-on/roll-off port in the UK, and an international gateway to Ireland, via the Irish Sea. It forms an integral part of the “land bridge” between Britain and the EU – a route that has suffered a downturn since Brexit added to the administrative overheads. Stena however say it remains the fastest route to transport goods between Ireland and the Continent.

If successful, the Angelsey Freeport bid is predicted to return Holyhead to pre-Brexit levels of trade. With the possibilities opened by freeport status, the prospects rise considerably for rail freight activity. According to initial modelling estimates by the partnership, the Anglesey Freeport would attract one billion pounds (1.2 billion euro) of investment. New employment, say the partners, lie in the range of 3,500-13,000 across the region. The bid, which has the backing of seventeen major businesses.

Rail freight in every other freeport

The bid is being made to both the UK government in London and the devolved administration in Cardiff. Westminster has already designated eight freeport locations in England, and pledged to add freeports in the three other nations of the UK, irrespective of any designations made by the devolved governments. It has been noted that one of the English freeports is Liverpool, a region which has long standing economic links with North Wales

So far, every other freeport announced within the government initiative has had extensive rail freight infrastructure within the geographical boundary. “A freeport would be a key pillar in creating long term, sustainable economic development on the Island and across the region”, said Carwyn Jones, the deputy leader of the Council. “We need the investment to reinvigorate the local economy in a long-term and sustainable way.”