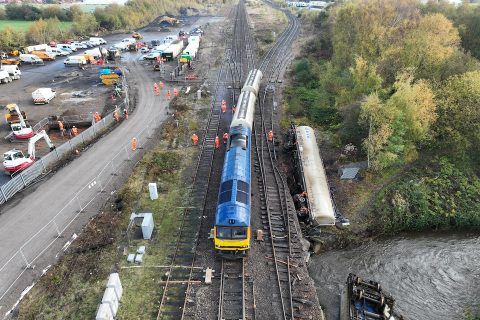 Direct lines are set to reopen between Carlisle and Newcastle and Carlisle and Skipton later this week after. The routes were closed by a major freight derailment in mid October. Engineers from the UK infrastructure agency Network Rail are working round the clock to complete complex repairs at Petteril Bridge junction, on the outskirts of Carlisle. The junction accesses lines east and south of Carlisle, allowing freight traffic to avoid the busy West Coast Main Line. The liens were blocked after several wagons of a train carrying powdered cement came off the track seven weeks ago.

Tracks were due to be reinstated over the weekend at Petteril Bridge junction. Huge damage was caused to a Victorian-built railway bridge, railway lines and signalling equipment during the incident on Wednesday 19 October. Initial reinstatement dates proved optimistic, once the extent of infrastructure damage was fully realised. A new reinforced-concrete bridge deck was required, ready for tracks to be reinstated so trains can run again from this Wednesday (7 December).

Since the derailment at Petteril Bridge junction, the railway has been closed in both directions – impacting all services on the Tyne Valley line between Carlisle and Newcastle and the Settle to Carlisle line between Carlisle, Appleby and Skipton. The latter route has been particularly vital to heavy freight traffic, which uses the route to avoid the West Coast Main Line. More than 25,000 hours of work has taken place to get the railway restored.

“I know how frustrating rail delays can be, and we’ve worked tirelessly to get the routes restored as quickly as possible”, said Phil James, Network Rail’s North West route director. “This has been a very complex recovery and repair job. When it’s complete this major railway junction will be better than new and will provide more reliable journeys for passengers and freight for years to come.”

Over the last seven weeks, rail accident investigators assessed the cause of the derailment. Early findings put the blame on a faulty wheelset on one of the derailed wagons (from a consist of fourteen). The heavy train had been conveying powdered cement. Eleven wagons were recovered soon after the incident, but three required recovery from the river in which they came to rest.