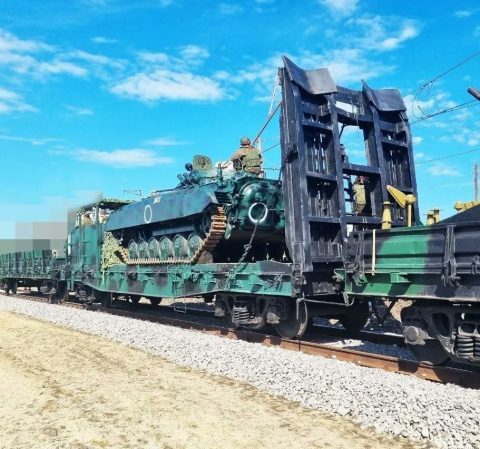 In times of war, everything changes, including the role of trains. We see that in Ukraine, where trains are now one of the most important evacuation means. But we also see how freight trains are used to support the military movement. In fact, pictures and videos of an armoured train operated by the Russian military were going around on social media this week.

An armoured train is a railway train protected with armour. Armoured trains usually include railway wagons armed with artillery, machine guns, and autocannons. They were mostly used during the late 19th and early 20th centuries because they offered a new way to quickly move large amounts of firepower.

Moreover, armoured trains equipped with ZU-23-2 were utilised during the Second Chechnyan War throughout the 2000s. Most countries discontinued their use, but Russia kept using some throughout the 21st century.

The train spotted this week, named Amur, will also be equipped with ZU-23-2, an anti-aircraft device. A similar train, called Yenisei, was sent in March, to Melitopol in Zaporizhzhia Oblast, a region annexed by Russia in September, in southeastern Ukraine.

A journalist for Izvestia, a Russian newspaper, mentioned on Telegram that the armoured train will be used to check dangerous sections of the track. However, he does mention that it can be also used to fight saboteurs since it is equipped with the ZU-23-2. Unofficial Russian sources are claiming that Amur will be sent in the same area the Yenisei is operating in.

The ZU-23-2 first entered service with the Soviet Army in 1960 and has been extensively used in the wars Russia carried out in Asia and the Middle East. The device measures almost five metres in length, almost three metres in width, and its height is a little over 1,20 metres. Its range can vary between 2,000 and 2,500 metres.

In this video, posted on Telegram on Thursday, 1 December, you can see a journalist from the Russian newspaper Izvestia and, in the background, the armoured train Amur in transit. RailFreight.com publishes the video only for informative purposes.