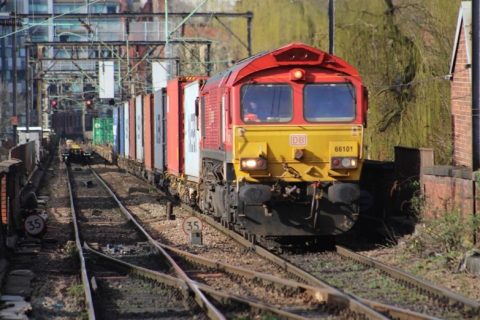 The Rail Freight Group, the representative body for the industry in the UK, has called for an ambitious target to be set for Great British Railways (GBR) to drive rail freight growth. However, with the whole project put in jeopardy by the current economic depression settling over the UK, the whole exercise could be put on indefinite hold.

The group was responding to the call for evidence from the GBR Transition Team, the interim administration put in place to guide the switch from the existing infrastructure agency, Network Rail, to the wider remit of the incoming GBR.

Political considerations aside, the Rail Freight Group (RFG) has highlighted the potential for freight growth, and the need for GBR to work with the private sector freight operators and customers to bring more goods to rail. That seems a policy that could be pursued under any administrative regime, including the existing setup. RFG do however say that a widespread change in attitude towards rail freight is necessary, and definitive targets must be set, otherwise the opportunity to greatly expand the beneficial impact of rail freight will be lost.

It has been a week of ambitions expressed for UK rail freight. With plans for the East Coast being rolled out by Network Rail, operator GBRf set to take advantage with their own ambitious plans, and the new transport minister having voiced ambitions to resolve the perma-strike on Britain’s railways, it is only appropriate for the ambitions to be aired of the industry’s representative body, the Rail Freight Group.

The UK government has committed to setting a freight growth target on GBR as a key part of its governance. That much is welcomed by the RFG. In the response from the RFG to the call for evidence from the GBR Transition Team, the RFG says it has sought evidence to support the target, as well as seeking views on how the target should be described.

“Our members want to move more of their supply chains onto rail and that will need the right partnership between GBR and the private sector”, says Phil Smart, the RFG assistant policy manager, and primary respondent to the consultation. “An ambitious growth target will help drive the right behaviours and build confidence in the sector.  We look forward to seeing more details of the target from government in response to this consultation.”

“A freight growth target is a vital part of encouraging modal shift and plays a significant part of the future governance of the railways and GBR, as described in the William Shapps Plan for Rail”, says the RFG document. “For customers it is a signal of government intent and market potential and therefore provides an encouragement to those considering the use of, and investing in, rail freight.”

Freight at the heart of GBR decision-making

Looking to the wider economic benefits, the Rail Freight Group makes the case to incentivise investment from the sector. For operators, they say a definitive growth target incentivises investment in wagons, traction, and recruitment of staff, all of which have long-term economic benefits. “For those considering a career in rail freight it gives confidence in taking up the appropriate studies”, says the RFG. “GBR must drive behaviours that support freight in day-to-day decision making across the routes and regions that make up the network, as well as in longer term strategies.”

The Group also encourages other parts of the railway industry to support freight development, including passenger train operating companies, insofar as they exist in the reformed administration of the railways. “Train Operating Companies [require] a reminder to support freight in decision making at every level”, says the RFG. “In [the] context of rail reform, the most important role must be incentivisation of GBR staff to deliver for freight, in particular across its routes and regions who will have an increased role in the passenger railway.”

In the Group’s submission, they note that the in the proposed governance structure for Great British Railways, freight has been conceived with a target as its core in the Plan for Rail and subsequent consultations. “As such, the target must be designed to act as a powerful incentive to managers across the company to put freight at the heart of decision-making”, say the RFG. “They must therefore be focussed on short term achievements, measurable and meaningful to those people. This will enable GBR’s routes and regions to be held to account for their delivery over the five year regulatory cycles as well as by government. “Recognising the different purposes of the target the Strategic Freight Unit should maintain a suite of measures which can encompass a wider range of factors.”

One, singular, a goal – for benefitting of UK advantage – instantly should target railways!
(Nearness to ports, ocean etc., is Advantage – and by Brexit now the low hanging fruit…)
For all hemisphere, a on road etc. congested Continent, as well flora of ports, is the Advantage, to benefit of – by energy effective SS feeding, via an Atlantic “Singapore”!
(However, industry of railways, as all other devices, urgently need upgrading, for optimal utilisation – added load capacity, etc., etc.)