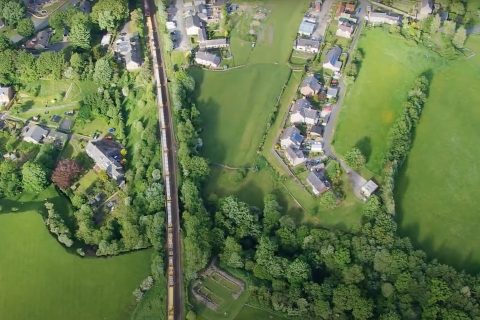 UK rail operators can handle more freight than they do today

Published on 28-11-2022 at 11:00
Overhead shot of a long freight train travelling through an English village and countrysideImage by Network Rail

Freight train operators in Great Britain can safely haul more goods wagons per train than current regulations allow. This is the conclusion of Rail Safety and Standards Board (RSSB). The question is how much additional traffic can be handled on Britain’s existing network.

The RSSB, the appointed independent arbiter of railway operations, has concentrated on getting more out of the existing network, infrastructure and hardware. They say their initial research has enabled tolerances on existing freight wagon couplers to safely connect more load.

The RSSB evidence means a 34.5 tonne coupler rating can increase 16 per cent to 40 tonnes, and some 56 tonne rated couplers increasing 13 per cent to a new 63 tonne rating. Crucially the uprated values can be applied to wagons in use today, without the need to upgrade or undertake a detailed engineering assessment.

A vast an immediate increase in rail freight capacity could be on the tracks for British rail freight operators. Increased capacity for tonnage moved, using existing equipment and rolling stock, could give a significant financial boost to the tight margins under which all British freight operators conduct their business. As a result of the RSSB research, more than 12,000 rail freight wagons, over 50 per cent of the current British fleet, will received an immediate increase in traction rating – that’s the amount of weight it is permitted to safely haul.

Not surprisingly, RSSB’s real-world case studies found that increasing coupler strength ratings will provide huge environmental and financial benefits. On a typical Anglo-Scottish journey; for example Felixstowe to Coatbridge or Grangemouth to Daventry; they say over two tonnes of carbon dioxide emissions can be saved, as well as considerable amounts of nitrogen oxides and particulate emissions. Significant financial efficiencies are also delivered due to the train length increase, say the RSSB – assuming the infrastructure and handling capacity already exists.

The RSSB has carried out trials across the UK network, delivering real-world results to back up their research. Among them, a one-hundred mile (160km) haul was increased from 24 to 27 wogons – at a length still well within the design standard of 775m maximum total train length. According to the RSSB, this provided environmental savings of 0.25 tonnes of carbon dioxide (CO2). Put into figures that are better appreciated in the boardroom, the projected annual financial savings are around 291,000 pounds (about 345,000 euro).

Longer journeys, simulating existing operations, delivered notable environmental and financial benefits. Test workings, approaching 500 miles in total (800km), had short formations of 14 and 19 wagons were increased to 16 and 23 wagons respectively. They produced emissions savings of almost one and a half tonnes in the first example, and over two tonnes in the latter. Finacial benefits were projected at almost a quarter of a million pounds (nearly 300,000 euro), and well over 350,000 pounds (nearly 425 euro) for the heavier load. According to the RSSB, the rail industry has immediately implemented the enhanced freight coupler load ratings and is working to identify routes suitable for longer freight services.

The mechanical performance of couplers has been improving over the years, says the RSSB report. “Therefore, the classifications used needed to be reviewed to ensure it reflect the current performance of coupler types in use. This RSSB research re-examined the engineering principles behind Network Rail’s coupler ‘traction rating’ designation used to set the loading limits. Ultimately this work aimed to optimise the relationship between coupler strength and permitted trailing load, to enable the rail freight industry to unlock additional capacity.”

“It’s good to see the results of our research directly helping freight train operators”, said Aaron Barrett, the RSSB lead research analyst. “By enabling longer trains, more goods and materials can be hauled per journey. This will have a hugely positive impact on emissions and financial efficiency. This research project is the first in a series, funded by the [UK government] Department of Transport, designed to help the rail freight sector in Great Britain. Our freight research programme is currently focusing on the safe operation of rail freight, raising the average speed of services, enabling the operation of longer trains and reducing emissions.”

The implications for operators are almost all good. Obviously, being able to haul heavier loads place a greater effort on existing traction, permanent way and handling facilities. However, there is capacity in the network to tackle greater freight weight lifted, and the industry has welcomed the research and revised limits, especially as they come with the gold-standard backing of the RSSB. “Rail Freight Group members have been working hard to improve the efficiency and performance of their rail freight services”, says Maggie Simpson, the director general of the Rail Freight Group, the industry’s representative body. “[They] look forward to moving more goods and materials on the new capacity this research has identified. RSSB’s research projects are bringing modern thinking and analysis to age old issues, and will enable more goods to be hauled by train without needing investment in new infrastructure or rolling stock.”

“This research is hugely promising”, said Huw Merriman, the recently appointed Rail Minister, Huw Merriman. “It’s great to see how we’re continuing to improve our freight network, so even more goods and materials can be moved with every journey, strengthening the UK supply chain. Government investment into new ideas and innovations is vital as we continue to strengthen the UK supply chain and strive towards greener freight and net zero by 2050.” Although transport is the largest contributor to greenhouse gas emissions in the UK, rail is only directly responsible for around 1-2 per cent of the sector’s carbon – that’s approximately 0.5 per cent of the UK’s total emissions. The full RSSB report has been published.

“Weight wise”, railways, indeed has got it’s edge!
By added utilisation, of existing, assets, etc., capacity can and has to be added.
Accordingly, at reinvestments, etc., robustness, resiliency and redundancy has to be ensured. (Tracks shall be upgraded, for future safely, sustainably, allowing of 32,5, etc. axial load.)
Bottlenecks, shall not be constructed!
Brexit shall be benefitted of!… Nearness to and within Market shall be Goal! (Commission seems to have forgotten goal off “Union”…)