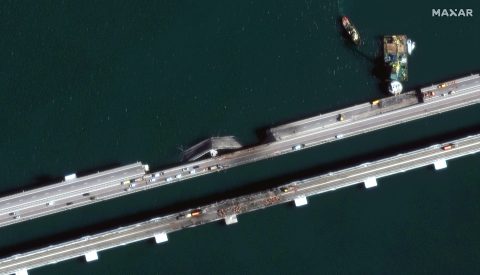 Ever since the bomb blast of the Crimea Bridge that connects the Crimean Peninsula with mainland Russia, rail wagons have been shipped across the Kerch Strait by vessels. The railway bridge is currently open with a single track, and this is likely to remain the case until fall next year.

Although Russian Railways announced that traffic had resumed two days after the attack on 9 October, the reopening was only limited to a single track. In order to compensate for the lost capacity for cargo on the rails (and also road, which was damaged more), several ferry services were reinstated across the strait.

From October 9 to November 24, 2022, the vessels deployed on the route transported in round trips 2,622 rail cars, 24,227 vehicles and 37,114 passengers, according to the Russian Transport Ministry. Rail cars are transported by train ferries Konro Trader and Avangard.

According to the UK ministry of Defense, the repair work on the railway bridge could take till September next year. “Replacement of the damaged rail bridge has been contracted for completion by September 2023, although Russia’s Deputy Prime Minister stated the repair timeline would be expedited”, the ministry posted on Twitter.

“One track is open, but rail transport remains restricted. Repair activity will be heavily dependent on weather conditions through the winter months”, it added.

On the morning of 8 October, a truck bomb went off on the road lane of the Crimea Bridge (also Kerch Bridge). As a result, part of the bridge collapsed, while the explosion triggered a fire on a freight train on the parallel rail section. The train was carrying fuel tanks, and seven of them caught fire.

When assessing the damage, it turned out that the bridge under the railway tracks was damaged. An even larger portion of the roadway was ripped off its joints and fell into the sea.

The Crimea Bridge was built by Russia after it annexed the Crimea in 2014. With a length of 19 km, it is the longest bridge in Europe. Freight traffic mostly runs between the Crimea, Moscow and St. Petersburg, but more recently, it was reportedly used for the supply of military equipment. The bridge attack has disrupted Russian logistics supplies for Crimea and southern Ukraine.