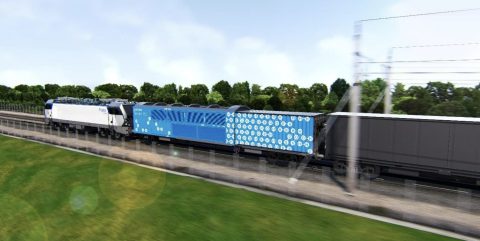 Nestle Waters France will use a hydrogen-powered freight train for the transport of VITTEL mineral water from 2025. The innovative system will be developed by Alstom and the hydrogen will be provided by ENGIE. The new system will allow for green traction of locomotives on rail sections that are not electrified, as Nestle explained. This means that one locomotive can carry transportation on the whole route.

The system entails a hydrogen-generating wagon that will supply electricity to the locomotive. The service will benefit the transport of VITTEL natural mineral water between the factory located in the Vosges and its various distribution centers in France. More specifically, Nestle Waters mentions the routes Vittel-Arles and Vittel-Montreuil Bellay as the possible beneficiaries of the service.

“Ultimately, this project should enable Nestlé Waters to reduce emissions by 10’000 tons of CO2 equivalent per year”, the company pointed out. Nestle Waters’ partnership with Alstom and ENGIE was launched last April. This project will make Nestle Waters the first European company to rely on renewable hydrogen, as the company claimed.