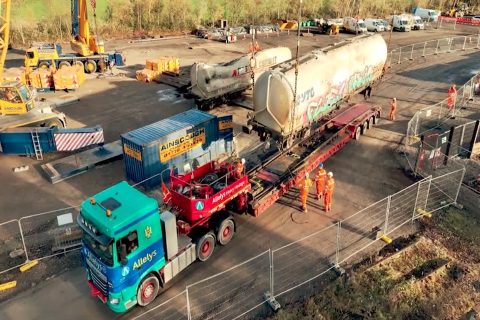 A massive crane lift has helped Carlisle repairs ramp up. Eight hundred tonnes of crane does not come cheap, but that’s the price of restoring the railway south and east of Carlisle. After a massive cement train derailed in October, it has been a massive effort to reinstate the railway around Petteril Bridge Junction, a deceptively simple name for what has become a memorably complicated engineering task.

The principal part of the derailed freight train at Carlisle’s Petteril Bridge Junction have been has been successfully recovered by railway engineers. Now major repairs are being ramped up to get the complex of lines reinstated as soon as possible. Initial hopes of a quick restoration were dashed almost immediately, and a target of the end of this month has slipped into December.

Footage has been released of the complex operation undertaken by contractors for Network Rail. Start of the show is an 800-tonne crane, used to successfully lift the vehicles over the mangled tracks at Petteril Bridge junction. From the pictures released it’s clear to see that the derailment on Wednesday 19 October caused significant damage to the bridge that caries the junction over the waterway, as well as track and line side equipment including signalling and points cabling.

Since then the railway has been closed in both directions – impacting all services on the Tyne Valley line between Carlisle and Newcastle and the Settle to Carlisle line between Carlisle, Appleby and Skipton, with onward tracks to the city of Leeds. The alternative route to Leeds involves a trip down the West Coast Main Line, still Europe’s busiest mixed traffic line. Newcastle can only be reached by a very long detour north, to Edinburgh, and then via the almost as busy East Coast Main Line.

The lift went well, but since then the weather conditions have done no favours to the team of around fifty engineers on site. Almost unrelenting rain has hit most of the British Isles in the last seven days, with only the weekend showing any significant respite. However, the lift, which removed stricken wagons from the river was completed before the waters went into spate and may have rendered the task too dangerous to complete. Despite the white water thundering below, work has continued to repair the badly damaged bridge, which requires completion before the tracks can be relaid.

Praising the team’s luck, Craig Jackson, the Network Rail Works Delivery manager, said the weather had been on their side to remove the three stranded cement wagons. “This marks a turning point in our hard work to get the railway repaired and reopen.”

Likely cause of the derailment

The wagons have since been loaded onto lorries to be taken away by accident investigators. Work is underway as fast as possible to repair the track layout and the bridge, both significantly damaged by the derailment. “The railway must stay closed while we carry out these important repairs”, cautioned Jackson.

An initial report published by the Rail Accident Investigation Branch found that a fault with a train wheel was the most likely cause of the derailment. Pictures published by the watchdog show an axle with a significant wheel flat and ‘false flange’. The grinding effect may have caused damage to a longer stretch of permanent way prior to the accident, which will undoubtedly have been inspected prior to any resumption of services.