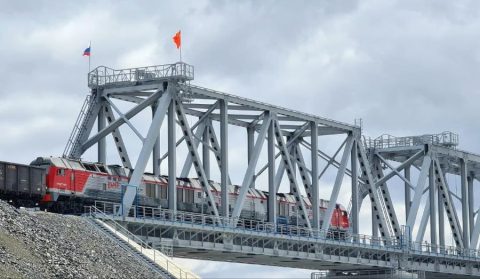 The Nizhneleninskoye-Tongjiang railway bridge, the first rail bridge connecting Russia and China, is finally up and running. The first train left Russia on Wednesday 16 November. With the bridge now in operation, the route to reach northern Chinese provinces from Russia will be cut by 700 kilometres.

The bridge crossing the Amur River is 2,2 kilometres long. It is designed for the alternate passing by being equipped with the Russian gauge (1520 mm) and the Chinese gauge (1435 mm). Initially, the bridge is expected to have an annual maximum capacity of 5,2 million tonnes. However, once the Birobidzhan-Leninsk railway section will be complete, capacity should increase up to 20 million tonnes per year.

Russian news agency Tass quoted the Russian Direct Investment Fund (RDIF) as the institution announcing the first journey. The RDIF is in fact the primary investor in the Nizhneleninskoye-Tongjiang railway bridge. The institution, in collaboration with Chinese partners, is in fact responsible for over 70 per cent of the financing of construction on the Russian side. Other Russian investors in the project are Russian Railways and VEB.RF, a Russian investment fund.

The project for the Nizhneleninskoye-Tongjiang railway bridge was launched in 2008, with construction starting in 2016. Construction was completed in August 2021, but the inauguration had to be delayed due to the Heilongjiang River flooding in the summer. The bridge has been in function since April, but freight transportation was not allowed on the grounds of lacking the necessary infrastructure.