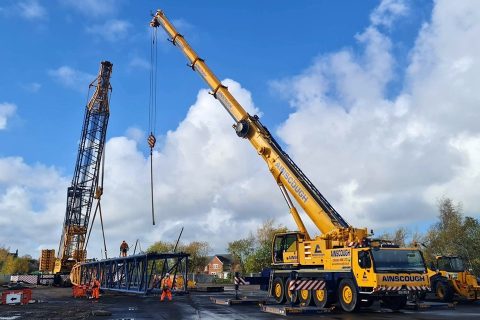 Carlisle progress but complications put UK reopening back by weeks

Initial hopes that the derailment at Carlisle would be resolved in a matters of days have resolved into weeks. The cement train that came off the tracks in the south east of the English city remains a challenge for engineers. Now a huge crane has been brought on site to lift the stricken wagons away from the crash site.

Damage to infrastructure at Petteril Bridge Junction, the site of the recent cement train derailment, is proving much more extensive than had been hoped. Engineers have a long shift ahead of them, in the hope of reopening the affected Iines sometime in December. Meanwhile traffic heading south and west of Carlisle is restricted to the busy West Coast Main Line.

Network Rail, the national infrastructure agency, has released aerial images of operations with the 800-tonne crane, brought on site to lift the derailed cement wagons from the line side and the River Petteril. They say rail engineers are making good progress to recover the derailed freight train, before major repairs can take place to get the railway reopened as soon as possible.

The damage happened on the evening of Wednesday 19 October, when five wagons, each filled with 80 tonnes of powdered cement, came off the tracks at Petteril Bridge Junction. One wagon ended up in the River Petteril and two others came to rest on the railway embankment. An initial report published by Britain’s Rail Accident Investigation Branch found that a fault with a train wheel was the most likely cause of the derailment. Video footage released by Network Rail graphically demonstrates how the line is bracketed by commercial and residential properties.

Preparing for the lift has been the most challenging task so far. That required removing 300 tonnes of powdered cement from the derailed wagons. However, the site is completely unsuitable for heavy engineering, so building a temporary pad has been required. That involved installing 3,800 tonnes of stone to build a site compound foundation, with 16 foundation piles, each 13 metres deep, for the crane pad.

With rail access denied by the derailment, and a fleet of 22 road lorries were required to transport the crane sections, and bring in an auxiliary 100-tonne lifting unit to assemble the main 800-tonne crane. Only once the wagons have been removed Network Rail can take over the site to fully fix the railway infrastructure at Petteril Bridge junction.

What was expected to be a complicated recovery is proving to be an even greater test of ingenuity for engineers. A team of forty will be on site each day, replacing 80 metres of damaged track, 400 metres of cabling, and replacing two track point assemblies. Most extensive will be the securing of the bridge foundations eroded in the River Petteril with 100 tonnes of stone, and the rebuilding of over forty metres of destroyed bridge parapet. Network Rail currently hope the work will be complete early in December so services can resume on the ‘Tyne Valley’ and ‘Settle and Carlisle’ lines.

While both routes provide lifeline passenger services, they are also important freight routes. The east-west Tyne Valley line was recently in the news as the route for aggregates trains delivering materials to a planned battery factory on the east coast – a project which is now in jeopardy (for other economic reasons). The Settle and Carlisle route, which was once threatened with closure as part of a rationalisation programme, is now a vital route for freight that relieves the busy West Coast Main Line.