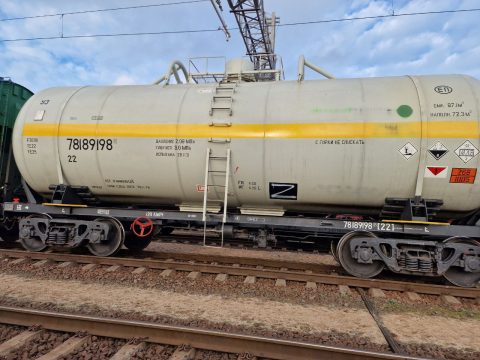 Lithuania rejected another wagon with Russian symbols, this time from Belarus

A convoy coming from Belarus was stopped on the Lithuanian borders on Tuesday 8 November, as the Criminal Service of the Customs of Lithuania said. The train was stopped and one wagon was sent back because one of the wagons was marked with a ‘Z’, one of the symbols of the Russian army.

The controversial convoy is owned by Ukrainian Railways JSC and used by Russia to transport goods, as The Community of Railway Workers of Belarus’ Telegram channel (belzhd_live) added. The stopped wagon was loaded with liquefied anhydrous ammonia, which was to be delivered to a Lithuanian company.

The wagon was detained at the Kena border crossing in eastern Lithuania and sent back to Molodechno, in western Belarus. The train was sent from Kaznacheevka, in the Tula region in western Russia, to Gaiziunai, in central Lithuania. Belzhd_live claimed that the same train was smoothly traveling through the same route with the same cargo before the ‘Z’ symbol was applied to the wagon.

Last week wagons were sent back to Kaliningrad

This is the second time in one week that a train was rejected by Lithuania. Last week, five wagons on two different convoys were stopped by the Lithuanian State Border Guard Service and sent back for similar reasons. This train was going from Kaliningrad back to Tolyatti. The cars were empty at the time it was stopped because unloaded ammonium sulphate was unloaded in the Russian exclave.

They were stopped at the Kybartai checkpoint, on the Lithuanian border with the Russian exclave, on 3 and 4 November. The motto of the Russian Airborne Forces, ‘Nobody But Us’, was on the wagons, together with their logo. The wagons were unhooked from the convoys and ordered to be sent back to Kaliningrad.