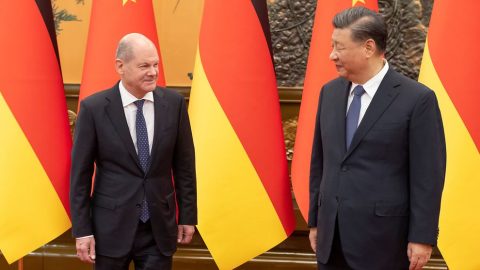 The 40-day journey witnessed a turbulent month of October for China and Germany. After COSCO’s acquisition of minority shares in the Container Terminal Tollerort, Olaf Scholz, Germany’s chancellor visited China to discuss the friendship between the two countries. The exhibition that followed brought a little bit of stability.

A celebration of China-German rail relations

According to Xinhua News Agency, there are 14 40-foot containers on the train arriving in Shanghai bringing the exhibition items to the CIIE. The items mainly include auto parts, mechanical components, and cleaning supplies.

This year coincides with the 50th anniversary of the establishment of diplomatic relations between China and Germany. This is also the fifth consecutive year that Germany is one of the overseas exhibitors of the CIIE. For the second consecutive year, the items arrived in Shanghai by train from Hamburg.

Not only the government: German company’s are interested in China too

On the eve of the CIIE, Scholz visited China for an intense 11 hours, under the pressure of domestic public opinion. He was accompanied by German business leaders, including CEOs of German companies such as Adidas, Deutsche Bank, Siemens, BioNTech, and Volkswagen.

The rest of the world is very interested in the timing of Scholz’s trip. A week ago, the German federal government had just announced that it would allow COSCO Group to acquire a 24,9 per cent stake in a terminal in the Port of Hamburg. Scholz’s trip was, therefore, inevitably speculated to be a show of affection to China.

Especially in the context of the energy crisis and inflation caused by the war in Ukraine, it is hoped that this will promote trade between the two countries. Just after Scholz’s visit to Shanghai, China and Germany announced to speed up the approval of BioNTech to enter China and signed a 17 billion euros Airbus order.

After the visit to China, Scholz published an article on the official website of the German federal government about China’s position as a partner, competitor, and rival.  “We must address this by accepting the competition and by taking the consequences of this systemic rivalry seriously and accounting for them in our policymaking. At the same time, we must explore where cooperation remains in our mutual interest. Ultimately, the world needs China”.

Germany’s preference for Chinese investment is no longer news. For example, German chemical giant BASF announced in July to invest in a new factory worth 10 billion euros in China. Moreover, Aldi is planning to add hundreds of new stores in China. Siemens plans to expand its digital industry sector in China.

This article was originally published in our Chinese sister publication, RailFreight.cn