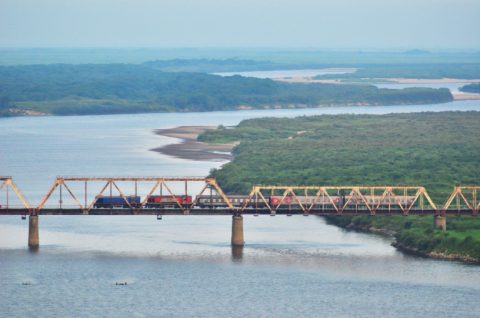 In a monumental event, the first Russia-bound freight train left North Korea on Friday, 4 November. The train carrying three closed railcars entered Russia via the only land link connecting the two countries, the Tumanagang bridge, also known as Korea-Russia Friendship Bridge. Though it is impossible to determine what the train carried, the combination of different facts leads to fears that it could transport ammunition destined for the Ukrainian war front.

According to 38North.org, a think tank monitoring developments in North Korea, the three railcar train departed a rail yard on North Korean soil on Friday, 4 November, at 10:24 am local time (02:14 am CET). The train crossed the 800-metre-long Tumanagang bridge, and by 1:10 pm local time (05:10 am CET), it was on Russian territory. At 2:29 pm local time (06:29 am CET), the train was spotted at the Khasan station in Russia, where it stayed for a bit with some additional rail cars waiting by its side.

The watchdog mentioned that the additional railcars could indicate the transloading of cargo that could be forwarded further into Russian territory. However, there is no concrete evidence proving that the shipment was indeed transloaded or whether it consisted of ammunition.

38North.org is a publication of the Stimson Centre for international security. The publication functions as a watchdog for North Korea-related matters concerning weapons of mass destruction and other political, economic and social developments. Its contributors include academics, researchers, policymakers and diplomats involved in the fields of international relations, human rights, intelligence, law, the military and even engineering.

To provide some context, rail freight services between Russia and North Korea recommenced a few days ago, with the first Russian shipment of 30 purebred Orlov Trotter horses taking place by rail. The two countries stopped trade relations in 2020 when the COVID-19 pandemic took over, and North Korea imposed strict border restrictions to prevent it from spreading. In September 2022, the two countries decided to reopen their border and restart transportation and trade. With these facts in mind and with the first Russia-North Korea train on the move, it shouldn’t be striking that Korea also sent a train to Russia.

However, there is more. For some time now, diplomats and security experts have been ringing the alarm bell regarding the development of Russian-North Korean relations. Specifically, voices mainly from the US have been warning that the two states are trading ammunition supplies-specifically North Korea supplies Russia with artillery shells to use in the Ukrainian war, said to Reuters John Kirby, the White House National Security spokesperson.

This, in combination with the confirmed supply of war drones by Iran to Russia, even though this allegedly took place months before the war in Ukraine started, has put the West on edge. Security experts fear that countries like Iran and North Korea have been and are still supplying Russia with ammunition that could prove critical in the Ukrainian war.

As a result, scrutinising even the slightest train movement that could indicate such a transaction can be rational. Still, no official conclusion can be drawn but considering rail’s role in the war over the past few months; no possibilities should be excluded.