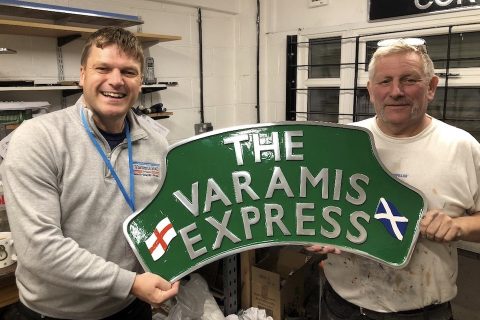 Express logistics has moved off the drawing board and on to the rails. Varamis, the independent express logistics operator, has dispatched its first train. Running from Birmingham International to Mossend in Central Scotland, the carrier has begun delivering light logistics – parcels to you and me. The operation, the brainchild of founder Phil Read, has been on the starting blocks since gaining its train operating license from the UK authorities in September.

Varamis Rail had a few last minute hoops to jump though, but their pioneering zero emissions, express logistics train departed on time, just before 01:00 on the third day of November (Thursday) from Birmingham International. Appropriately enough, the destination was cross-border. The inaugural service arrived less than five hours later at Mossend in Bellshill, Central Scotland, just outside Glasgow.

Under five hours each way

It has been a long haul for the fledgling operator. Now, it’s just a question of making the long haul between Birmingham and Scotland. “Our first proof of concept route is in operation between Mossend Down Yard – Birmingham International”, said an understandably excited Phil Read. “Taking just under five hours each way, this new service will deliver a step change in overnight Anglo-Scottish express linehaul.”

The key to the operation has been the procurement of the operator’s first repurposed class 321 electric multiple unit. The EMU, a four-car former passenger unit, has been completely refurbished and refitted by Wabtec in Doncaster, nearby Varamis Rail’s HQ. It’s rated for express running, and has already been proven on both the East and West Coast Main Line routes.

Huge tick in the environmental box

Although the West Coast Main Line is always quoted as Europe’s busiest mixed-traffic route, there is still overnight capacity on the line. Varamis is using one of those paths, each way, to fulfil its service. “Operating overnight, this service is ideal for express parcel companies or third party logistics companies”, said Read. “We can those companies who have volumes of fast moving consumer goods and a commercial need to transport volumes for next day delivery between Scotland and the Midlands.”

Read has obviously spent his time between concept and licensing wisely. The express logistics market has been booming, and the combined effects of the pandemic, greater internet trading, and price pressure on family budgets have all mitigated to make the marketplace grow rapidly. The zero emissions nature of the operation is a huge tick in the environmental box too. Governments on both sides of the border are already taking an interest in the operation. The Scottish government’s Transport Scotland agency has already said cross-border logistics needs dozens more daily movements by train. McVaramis to the rescue on that point.