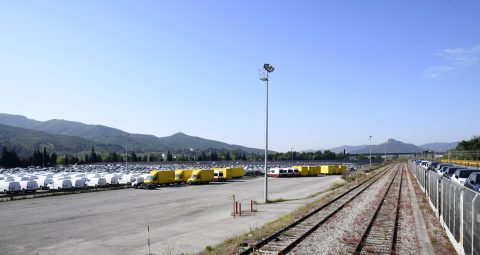 The new security and telecommunications system at the La Llagosta multimodal terminal, fifteen kilometres from Barcelona, will be ready by the end of 2024. Adif, the Spanish infrastructure manager, said that the total value of the tender is 17,4 million euros. La Llagosta is currently undergoing a process of comprehensive transformation to adapt to European freight standards.

The contract was won by a Temporary Union of Enterprises formed by Siemens Rail Automation and FCC Industrial and Energy Infrastructures. The financing is also expected to cover the supply of materials, assembly operations, the execution of the necessary works and installations, as well as its commissioning. The project is being financed through the EU’s recovery package NextGenerationEU.

The future of La Llagosta

More recently, Adif has started a project that will connect the hub with the high-speed line connecting Barcelona with the French border. This project should be completed by August 2024.

Operations at La Llagosta terminal will be managed by Train Port Barcelona, a joint company launched in July by Adif and the Barcelona port authority. The terminal will be suitable for trains of 750 metres in length and will be equipped with four lanes for loading and unloading Intermodal Transport Units.

The total investment for the La Llagosta terminal is therefore now close to 80 million euros. The terminal will be connected with mixed gauge to the El Papiol-Mollet line and in standard gauge to the network of high speed, in both cases from the Bifurcation of Mollet. As Adif pointed out, the contract awarded for the platform, track, and electrification actions amount to 59.6 million euros.