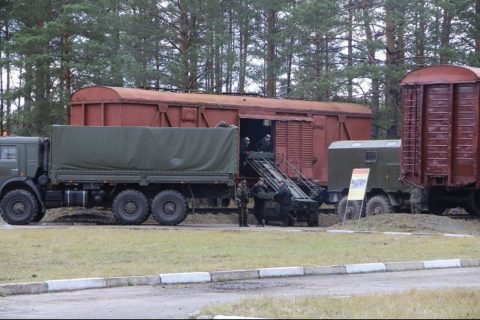 Russia and Belarus have exchanged over 100,000 tonnes of ammunition via rail between February and September 2022. The Community of Railway Workers of Belarus’ Telegram channel, belzhd_live provided specific data on the amount of ammunition that Belarus and Russia exchanged during the first eight months of 2022.

This data shows the importance of the railway infrastructure in this conflict and can give an overview of the necessities of the Russian army. Moreover, it shows the strength of the relationship between Putin and Lukashenko. For example, Belarus allowed Russia to stage part of the invasion from its territory, giving Russia the shortest possible land route to Kyiv.

The importance of Stop the Wagons and the rail war

On another note, this data also shows how significant the attacks on the railways, such as the one led by the Stop the Wagons movement on 24 October. The railway line that was bombed near Novozybkov is in fact being highly used for the transportation of military equipment. Another explosion in a railway facility at Shakhtarsk, Donetsk oblast, on 26 October, led to the destruction of 12 Russian fuel tanks. So far, this event does not seem related to rail guerrilla movements such as Stop the Wagons

The attack perpetrated by Stop the Wagons previously mentioned occurred on a line that reaches the Dobrush station in southeastern Belarus. As the data provided by belzhd_live shows, Dobrush is the most used station when it comes to loading and unloading ammunition between Russia and Belarus.

From Russia to Belarus

February was the busiest month for the export of ammunition to Belarus, which can likely be linked to the start of the Russian invasion of Ukraine. In fact, 26,769 tonnes of ammo, which amounts to more than 71 per cent of the total and equals 951 wagons, were moved in that month in that direction.

An additional 8,089 tonnes, amounting to almost 22 per cent, was transported in March. The amounts have decreased every month since then, with 2,4 tonnes of ammunition sent for the period between April and August. It is unclear whether data for April and May was not available or if no ammunition was sent to Belarus from Russia during these two months.

From Belarus to Russia

When it comes to the export of ammunition from Belarus to Russia, the busiest month was April. During this month, 22,534 tonnes of ammunition, which amounts to 689 wagons and almost 35 per cent of the total, was sent to Russia. Between May and August, the flow stabilised, ranging between 6,033 and 8,606 tonnes each of those months.

Another spike came in September, with 14,479 tonnes, equal to 442 wagons and over 22 per cent of the total. It is worth noting that since April the transport of ammunition from Russia to Belarus significantly decreased to almost a halt. On the other hand, ammunition from Belarus to Russia is still flowing at a quite high pace.