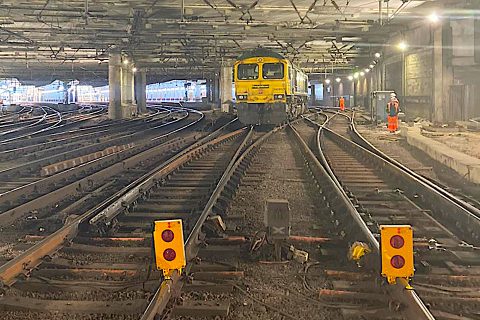 An engineering train working on London’s Liverpool Street terminus was involved in a runaway incident early in October. The safety watchdog, the Rail Accident Investigation Branch, has been alarmed by the incident. Initial reports say it could have been much worse than the rolling stop before the end of the possession markers.

The subterranean approaches to London Liverpool Street station were the scene of a potentially disastrous accident, reminiscent of the Denzil Washington film Unstoppable. That, of course, is not how the Rail Accident Investigation Branch describe the incident, but a runaway engineering train is still a runaway engineering train, and that’s railway box office for all the wrong reasons.

A package of works and upgrades

The Rail Accident Investigation Branch says a Safety Digest is to be prepared following the runaway of an engineering train at London Liverpool Street station (on 2 October 2022). A Safety Digest, following a preliminary RAIB examination, is where the official safety body decides not to undertake a full investigation and are preparing a document, a Safety Digest, at short notice.

The train was involved in a package of works and upgrades to the line between Norwich and London. The work is being carried out this autumn by the infrastructure agency Network Rail. They say essential rail upgrades are taking place on the Great Eastern Main Line and several branch lines this autumn and in the lead-up to Christmas.

Just before noon on 2 October, an unattended freight train ran away from platform 3 at London Liverpool Street station. “The signaller was alerted to the train’s movement by track sections in the throat of the station showing occupied unexpectedly”, says the RAIB statement. “The incident happened within a part of the station that was, at the time, under possession for engineering work. The unattended train travelled about 150 metres before coming to a stop within the possession limits.”

No one was injured as a result of the incident, although a set of points which the train ran through were damaged. “We have undertaken a preliminary examination into the circumstances surrounding this incident. Having assessed the evidence which has been gathered to date, we have decided to publish a safety digest.

The RAIB say that the relevant safety digest will be published in the next few weeks. Denzil Washington has not been approached for comment.

Most interesting to learn about Analyse, when official!
(Track works are costly – and mean added risks…)