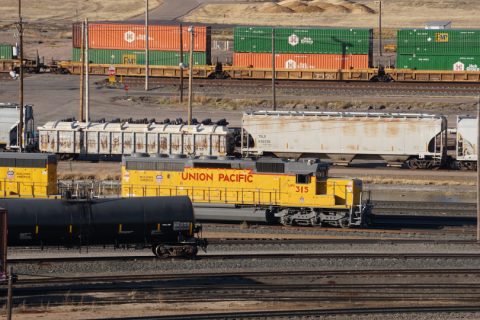 The tentative deal proposed by US president Biden to resolve a labour dispute between railway carriers and unions has received its first rejection. More than 50 per cent of BMWED’s members, the country’s third-largest rail freight union, voted against the deal. As a result, fears of a massive rail freight strike in the US during the coming months revive.

The possibility of a strike would become more concrete around late November. Since the country’s two largest unions, SMART Transportation Division and BLET, have not cast a vote yet, the picture will get clearer after they finish with balloting procedures. However, the first rejection of the Biden administration’s deal creates a pessimistic atmosphere.

The discussion around US rail freight strikes began in September. They resulted from a labour dispute between railway carriers and unions concerning the two-person crews on freight trains. Specifically, the dispute focused on attendance policies which the unions claim penalise workers for going to routine doctor visits or dealing with family emergencies.

President Biden intervened in the conflict personally, seeking to ward off a massive national strike that would paralyse the country’s supply chain. The deal he put on the table granted railway workers one additional paid day off and the ability to attend medical appointments without penalty, labour unions said. The agreement also included an immediate 14,1 per cent wage rise.

Despite the initial optimistic response to the possible dispute resolution and the temporary strike avoidance, rail worker unions still had to vote on the government’s proposal. BMWED was the first to cast a vote and conclude a negative response to the deal.

“Railroaders are discouraged and upset with working conditions and compensation and hold their employer in low regard; they do not feel valued. They resent that management holds no regard for their quality of life, illustrated by their stubborn reluctance to provide a higher quantity of paid time off, especially for sickness,” said BMWED president Tony Cardwell, announcing the rejection vote on Monday, 11 October.

What remains now is for the rest of the unions to vote. According to BMWED, the US rail freight industry should be aware of a possible industrial action around 19 November. For the record, the impact on the US food and fuel supply chain and the economy will be significant in case of strikes. If rail shipments stop, the loss in economic output would likely be at least 2 billion US dollars per day.

Railways, formerly a most proud transport device, now is, at the mercy of taxpayers. This is not sustainable!
Quality pays and for high quality at vital functions of society, transports, etc., just the requested are:
resilency, redundancy and robustness, simple as that!
Currently railways is short of all three – and accordingly now a low quality device.
Standards, optimal for electrification, at shift from steam, no longer is, etc.
A New Old Railway now is needed!