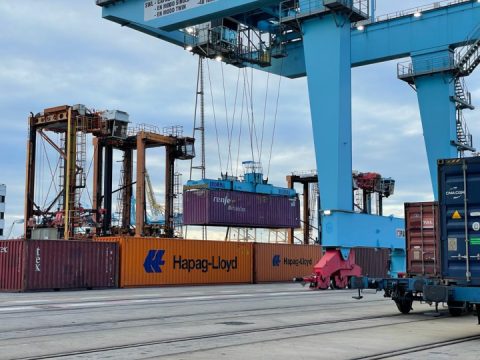 Ukrainian grain reaches Spain by rail, but route is harsh and rocky

Published on 10-10-2022 at 13:37
Renfe container. Spanish Ministry of Transport, Mobility and Urban Agenda

Spain is testing new opportunities, including rail, to secure its food supply chains. In that context, the Spanish Ministry of Transportation organised a pilot rail shipment for Ukrainian grain. The first train that travelled all the way from the Ukrainian border to the Can-Tunis rail terminal in Barcelona carried 600 tonnes of grain in twenty-five 40-foot containers. Despite its success, it raised some major concerns.

“The project serves to analyse the technical and economic feasibility of grain rail transport as a complement to the maritime mode at a time marked by the war in Ukraine,” underlined the Spanish transport ministry. However, the governmental institution also stressed that the pilot project could serve as a future solution to other disruptive supply chain factors like port closures or incidents like the one in the Suez Canal last year.

The Spanish train equipped with Renfe Mercancías’ containers arrived in Barcelona on Thursday, 6 October. Before reaching Spain, it travelled for 2,400 kilometres from the Chelm terminal on the Polish-Ukrainian border through Lodz and Duisburg. The train made it to its final destination; however, this might not prove enough for the service’s full assessment.

That is because the Spanish transport ministry faced the harsh reality of the Ukrainian border and the European railway network. The first issues appeared at the Chelm terminal, where, as the Spanish authorities put it, “it is impossible to predict congestion situations, that made loading Renfe’s containers hard since they caused significant delays”.

On top of that, there was the issue of compatible infrastructure and equipment. As explained, the grain cargo did not arrive from Ukraine to Poland by rail. In contrast, it was trucked. On top of that, the grain load was not containerised. Consequently, grain had to be loaded manually on Renfe’s liner containers (special containers with large bags inside suitable for grain transport) from the trucks. This was a very time-consuming process that took place with the support of cranes.

Indicative of the delay is the arrival of the Spanish train in Chelm in the first week of September. The loading procedures did not start before 15 September, making it understandable that congestion at the border was almost impassable for days.

As if those hardships were not enough, said the Spanish transport ministry, the pilot rail service faced some more on the Western European end. Specifically, the train that transited through Lodz and Duisburg on its way to Barcelona had to make a several-day stop in Germany without being able to move.

Of course, a stoppage in Duisburg was planned anyhow. Yet, it lasted more days than initially estimated due to strikes in the French railway network. As a result of the strikes, French authorities restricted traffic, and the Spanish train could not secure train paths to transit.

In the end, the service was successful despite the unforeseen or existing but underestimated obstacles. The transport ministry of Spain concluded that this first pilot service does not provide much space for optimism. In contrast, it underlined the struggles faced by multiple companies assisting with Ukrainian exports and the lack of central coordination in Europe, even concerning projects of such importance.

The initial assessment for the grain rail link reads as follows: “the initiative has shown that, in the current context, long-distance rail transport requires a great effort of coordination between the different actors that participate in the process, the most complex points being management at the terminals, as with the loading of grain in containers adapted with “liners” at the Chelm terminal, and the responsibility for it on the return journey,” concluded the Spanish transport ministry.