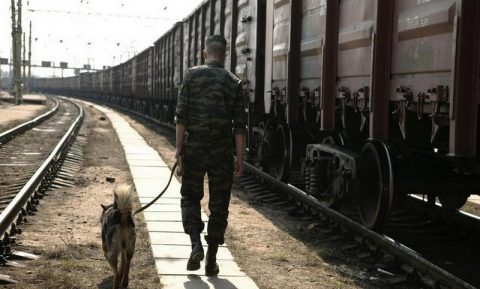 Since the beginning of the war, Ukrainian railway workers have played an essential role in keeping the critical infrastructure up and running. A special paramilitary branch of Ukrainian Railways is tasked with protecting infrastructure, goods and the Ukrainian people. What is the background of these railway guards?

On 10 March, less than a month after the Russian invasion of Ukraine started on 24 February, an amendment to a  resolution in Ukraine was made. “During the period of martial law introduced by Decree of the President of Ukraine, the paramilitary staff of the departmental security of Ukrainian Railways may be involved in national, military and special measures, the escort and protection of rolling stock, and the protection of infrastructure facilities.”

Tasks of the paramilitary branch include countering military threats and providing assistance in protecting the population, territories, natural environment and property from emergency situations, the resolution states. Military-grade weapons may be used in accordance with the legislation. Also, a clause was added that states that military property of other military formations, particularly weapons and ammunition, may be transferred to Ukrainian Railways for use by its departmental paramilitary protection units.

These tasks on the railways are not without their dangers, with infrastructure being an important target for the Russians. This week, for example, Kharkiv was heavily shelled again, damaging the rail infrastructure, said the head of Ukrainian Railways (Ukrzaliznytsia) Alexander Kamyshin on Twitter.

History of the paramilitary branch of Ukrainian Railways

A paramilitary presence in the Ukrainian Railways is not new and has existed since the nineties. The original resolution regarding the paramilitary staff of Ukrainian Railways (JSC Ukrzaliznytsia) dates back to 1994. For example, it served cargo transport and infrastructure, with tasks including protecting goods and materials from being stolen.

Before the war, the regional branch of Ukrainian Railways in Southern Ukraine, Prydniprovska zaliznytsia, said that the paramilitary guards of the Prydniprovsk Railway saved cargo and property worth more than 4.3 million hryvnias (121.000 euros) from thieves in the year 2020, the result of a total of 428 cases of criminal intrusion on goods transported by the railway. Also, at least 1,116 people were fined for walking on the tracks. Since 2020, paramilitary guards were also added to passenger trains to increase security on trains. In Ukrainian media, a link was made to the assault of a woman on a train shortly before.

With the Russian invasion in 2022, the tasks of the paramilitary guards were extended to countering military threats and protecting the population. Earlier this month, paramilitary guards of the Kharkiv region, Prydniprovsk Railway and the Odesa Railway received new bulletproof vests and first-aid kits, announced Ukrainian Railways.

“We continue to staff departmental security personnel. Special attention is given to those guarding critical infrastructure and cargo near the front lines”, said Volodymyr Aleksandrov, executive director of the Departmental Military Guard branch of Ukrainian Railways.

Earlier this year, in March, Ukrainian Railways posted on Telegram that, together with the military, they detained two Russian saboteurs working in Kyiv, saying that “the traitors were handed over to the relevant authorities”.

Some railway branches in Ukraine also play a role in eliminating and preventing fires. In total, Ukrainian Railways has 46 firefighting trains in its fleet. During the full-scale war, they were called upon 61 times to combat fires, accidents and the consequences of shelling by Russia.

This article appeared originally on our sister publication RailTech.com.