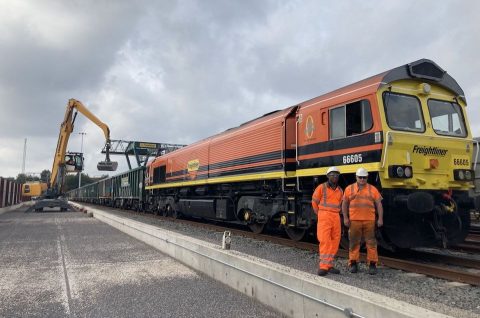 Published on 30-09-2022 at 06:00
Staff pose proudly in from of bulk train at Freightliner Birmingham TerminalImage Freightliner - LinkedIn

UK rail freight operator Freightliner has celebrated the inauguration of another new bulk materials flow for their UK operation. The carrier, part of the American-owned Genesee and Wyoming group, delivers construction materials from Shap in the northwest of England to their Birmingham terminal. The flow is notable for the rail freight sector since the route is paralleled by convenient motorways.

Freightliner says their carrier operations will take sixty heavy trucks off the UK roads for every trip completed. This new service for Hanson UK delivers 1800 tonnes of aggregates per trip. They say that the congestion level, particularly around the Birmingham end of the working, contributed to choosing rail over other modes.

Faith in rail for bulk transport

Through no fault of their own, Freightliner may be a name that is synonymous with intermodal traffic. That word may be associated with road trucks in the land of their American parent, but it is to their credit that their customers have put their faith in rail for their bulk transport. In fairness, neither carrier nor customer is new to rail freight, and this collaboration was always likely.

West Coast Main Line users will be familiar with the extensive Hanson quarry at Shap, the high point of the line in the heart of the Lake District. Further south, the Birmingham Freightliner Terminal is also adjacent to the WCML and in the heart of the city. For Hanson, it brings their materials to their principal markets in the West Midlands conurbation while avoiding a 160-mile (240km) road trip.

Hanson UK is a leading supplier of heavy building materials to the construction industry. We produce aggregates (crushed rock, sand and gravel), asphalt, cement and concrete. Their materials may well be found in the vast construction project for HS2, within sight of the Freightliner terminal in Birmingham. However, the company has played a role in major rail projects, such as the sea wall defence at Dawlish in southwest England, the London Gateway Port extension and the Elizabeth Line projects in London.

Freightliner’s collaboration with Hanson is no small operation; however, to emphasise the scale of their rail freight operations, it is worth noting that Freightliner dispatches around 400 bulk trains per week and moves 31million tonnes of bulk freight annually.

Net zero on both sides

Freightliner is actively moving towards a net-zero operation. They recognise that rail cannot replace all road movements, but they say they aim to optimise rail and road modes to offer the most effective solution. “Whilst our rail services can move large volumes of freight over long distances very efficiently, our road operation can be flexible in delivering to the customer’s door”, say Freightliner.

Hanson, too is critically aware of its carbon footprint, and rail is playing a part in reducing that environmental burden. Earlier this year, in January, in collaboration with another rail freight operator, the Penmaenmawr railhead in north Wales was reopened as part of Hanson’s strategy to reduce vehicle movements and cut associated CO2 emissions.

UK businesses can soon share their stories in a full-colour digital magazine tailored to the UK rail industry. The RailFreight UK Christmas Special will be published on 15 December. Details, including how to take part, can be found here.