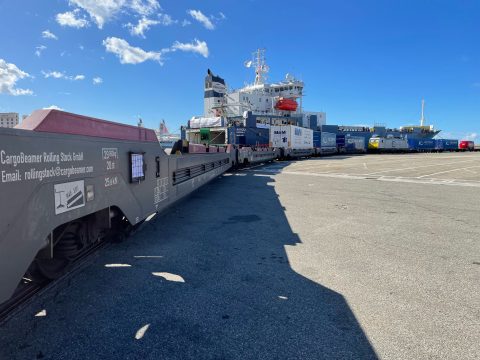 CargoBeamer has operated the first test train between Marseille and Calais transporting craneable and non-craneable semi-trailers. The service connects the Port of Marseille Fos with the CargoBeamer terminal in Calais. On the inaugural journey, 28 units, which would have been moved by road, were transported on rail.

It is the first train inside the port that allows shifting craneable and non-craneable semi-trailers to rail,” said the company on LinkedIn. The convoy was made up of CargoBeamer railcars as well as twin pocket wagons, as it is typical for all the company’s routes. DB Cargo France was in charge of tractioning the train. CMA Terminals, a subsidiary of CMA-CGM, handled the train inside their Marseille Manutention Ro-Ro Terminal.

“I am pleased to see the successful completion of our first test train between Marseille and Calais. In the Port of Marseille Fos, we have connected a highly interesting location in international supply chains to unaccompanied transport of semi-trailers on rail for the first time,” said Tim Krasowka, Managing Director of CargoBeamer intermodal operations.

The Leipzig-based company has been actively trying to increase the transportation of non-craneable trailers. Just a couple of months ago, CargoBeamer increased its weekly roundtrips between Domodossola, in North-West Italy, and Kaldenkirchen, on the German-Dutch border. Moreover, the company increased the frequency of the rail freight service from Domodossola to Calais as well.