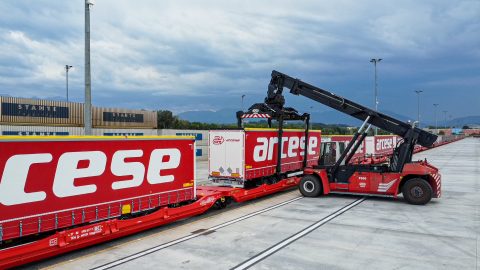 A new connection between Italy and the main industrial centers in Czech Republic has been launched. The rail service connects the terminals of Manopello – In-terporto Abruzzo in Southern Italy and Ostrava-Mošnov. The company train of Arcese is managed by Innofreight and operated by Captrain Italia in cooperation with Sangritana, Budamar Logisitcs, a.s, and ČD Cargo.

There are currently 2 departures per week with transit times of 4-5 days door-to-door exclusively with mega XLS semi-trailers. The plan is to increase to 3 weekly roundtrip departures from October 2022.

According to Arcese, more and more customers are choosing combined transport services as a reliable and environmentally sustainable transport solution due to the reduction of CO2 emissions. “Suffice it to say that for every route travelled by a single train along this axis, no less than 190 tonnes of CO2 will be saved compared to the equivalent road transport, a benefit that totals more than 54,000 tonnes of CO2 saved by the end of the year”, the company said.

“Combined transport is a growing market whose development is strongly influenced not only by demand, but also by loading capacities, connections and the quality of services offered”, said Guido Pietro Bertolone CEO of Arcese, who continued: “The outlook for the coming years is one of dynamic growth in intermodal transport, which as part of the European Green Deal will contribute substantially to the decarbonisation of global supply chains. By developing more sustainable transport solutions and increasing the share of intermodal services for our customers, we can support the EU’s long-term strategy and thus the modal shift”.