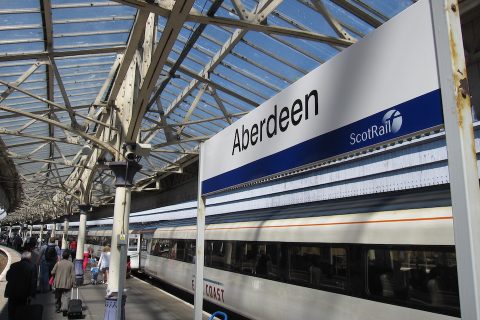 It may be styled as Europe’s oil exploration capital and Scotland’s third city by population, but Aberdeen registers lowly on the scale of rail freight activity. However, a programme of works by Network Rail could help stimulate growth. Activity is ramping up over the next few months between Perth and Aberdeen, improving connectivity with the Granite City.

The coming weeks will significantly increase activity as Network Rail and their appointed contractors carry out a five million pound (almost six million euro) package of work to assess several existing bridge structures, including those in Perth, Dundee, Broughty Ferry, Arbroath, and Aberdeen.

Capacity and gauging issues have hampered freight growth between Aberdeen and markets in the rest of Great Britain. However, the Scottish government has targeted the line for electrification as part of an overall decarbonisation programme. Presently, the nearest wires are at Dunblane, around 120 miles south (192 km).

Opening the route to electric traction will considerably improve the attractiveness for rail freight operators. The designated “Aberdeen to Central Belt Enhancement Project”, of which this year’s works are a preliminary part, includes explicitly measures to address freight route availability.

Aberdeen’s freight activity has been meagre of late. The city’s relatively isolated position at the northern end of supply chain routes suggests that Aberdeen should figure more prominently in rail freight diagrams. That is something Network Rail route delivery director Iain McFarlane hopes these projects will begin to address. “Ultimately, the work informing both the enhancement project and future opportunities will benefit passengers and freight customers by improving capacity, connectivity and journey times, as well as further developing a sustainable and greener railway environment”, he said.

In the last year, Network Rail has instructed ground investigation work across 72 miles (115 km) of the railway as part of the two hundred million pounds (237 million euro) Aberdeen to Central Belt enhancement project. When finished, it should reduce the uncompetitively slow rail journey times from Aberdeen to Glasgow, Edinburgh and Dundee and improve connectivity and enhance capacity for both passenger and freight trains.

There was a celebration when a regular bulk flow was introduced, utilising the dock infrastructure – the so-called Waterloo branch. However, the even more recent intermodal flow has struggled to make an impact and remains sporadic. The most promising freight development revolves around ambitious expansion plans tabled by the city’s port operators – a project which remains some way into the future.

The line, particularly between Dundee and Aberdeen, suffers from restricted gauge clearance. The ground investigation work is also informing those future plans for the route, including enabling higher and wider freight traffic. Unrestricted intermodal traffic has healthy two-way potential for Aberdeen. Maritime imports could balance incoming consumer goods to the busy docks.