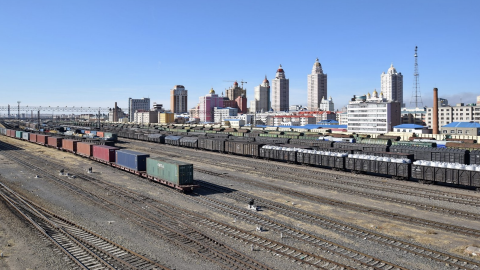 Russian Railways wants to open additional border crossings for rail traffic in the Far East. The border point of Zabaikalsk-Manchuria does not provide enough capacity to match the growth expected, it said. Russian Railways is currently rolling out a diversification strategy when it comes to its cross-border connections, and rail traffic between Russia and China through the Far East is on top of the agenda.

This was discussed at the recently held Eastern Economic Forum (EEF) in Vladivostok. As China is gradually letting go of its stringent COVID restrictions, rail freight volumes are expected to witness an uprising. Russia would like to see the fruits of such an uprising support the economic activity in Russia’s Far East, which serves as a transit region for rail freight between the countries.

“We considered the possibility of modernising the infrastructure at the Zabaikalsk-Manchuria border crossing to increase the transfer of goods after China lifted covid restrictions”, Russian Railways explained on the social media tool Telegram.

According to the Russian state-owned railway company, a promising project is the creation of a new railway border crossing through Priargunsk, which will give access to the Trans-Siberian Railway to the border provinces of China, Inner Mongolia and Heilongjiang. It also mentions that China plans to build a connecting railway line of 192-kilometre long to connect the border crossing to the network.

Another border crossing of interest is the Solovyovsk-Erentsav checkpoint. This would also require a new railway line to connect with the railway network of Mongolia. “Subject to the additional development of the infrastructure of the Ulaanbaatar railway, this will allow organising another channel for the transit of goods to China”, Russian Railways stated.

The volume of rail traffic between Russia and China in the first 7 months of 2022 increased by 6 per cent, according to Russian Railways. Many companies in Russia are now looking east, considering the hampered trade with western countries. China has become the most important trading partner of Russia.

But the real uptake is yet to be observed now that COVID restrictions are to be relieved, is what Russian Railways seems to expect. Although rail traffic to and from China is among the top priorities of the company, the infrastructure is not ready to cope with the expected boom. “We believe that more checkpoints should be opened, and not only in Russia – we are now actively working with colleagues in Mongolia and Kazakhstan. We believe that this will also give a very serious increase”, said Head of Russian Railways Oleg Belozerov.

Before the war in Ukraine started, the railway crossings in the Far East played a minor role in international traffic compared to the routes via Kazakhstan. In 2021, the Erenhot border handled a total of 2,605 China-Europe trains. In Manzhouli, this number was 4,235 China-Europe trains.

Now that many companies in Russia have shifted their focus towards the east, bottlenecks have started to occur. This was pointed out by Udokan Copper, the developer of one of the world’s biggest copper deposits, which will begin exporting its products to China in 2023.

During a panel discussion at the same EEF gathering, the chairman of the company’s board of directors Erkozha Akylbek noted: “Our cargo loads will increase: when the first stage of operations is launched, they will total around 600,000 tonnes per year, and they will rise to 1.2-1.5mn tpy in the second stage. But at the moment, the shortfall in transport capacity in the Far East exceeds 70mn tonnes, and according to the Ministry for the Development of the Far East, it will grow exponentially in the coming years.” (reported by Intellinews).