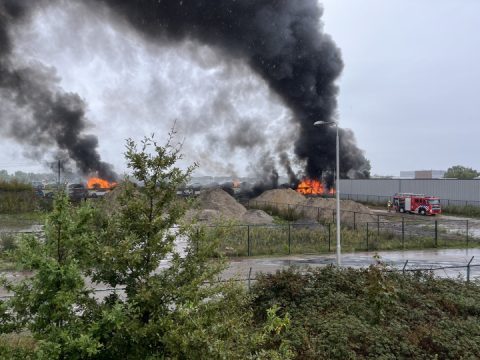 Freight train carrying cars bursts in flames in the Netherlands

A freight train carrying cars was involved in a fire accident in the Netherlands near the city of Breda on the south of Rotterdam. According to the Central and West Brabant Security Region, cars on the train went on fire after hitting the overhead electricity lines. The train driver is safe, and no one else was harmed.

The freight train with brand new Ford cars was en route from Germany to the car terminal of Cobelfret in Vlissingen-Oost. The fire broke out at approximately 13:40 CET on Wednesday, 14 September. Several cars in different parts of the trains were burning simultaneously, producing lots of black and thick smoke.

Employees of the infrastructure manager ProRail arrived at the accident’s location on time to turn off the overhead lines, while the line in which the fire occurred will remain closed until 18:00 CET.

At the moment, most fires have been extinguished, with only a few remaining cars burning on the train.