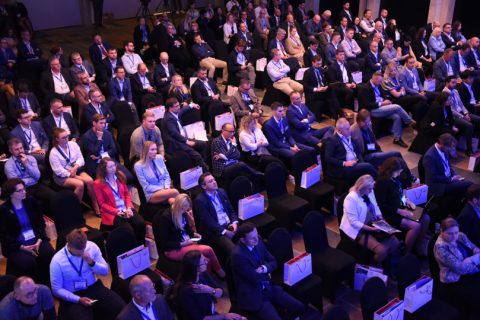 ‘Ukraine needs rail equipment, longer-term plans are for the future’

Investing in future projects that include Ukraine is not the only solution, as the industry and policymakers should ensure resolving current and burning issues. At the same time, the current situation in the supply chain caused by the war in Ukraine is here to stay. It will take years to return to ‘normality’, if this is even a possibility, and the focus should be on adjusting to the new reality and moving on from there.

These views were shared during the opening session of the second day of the RailFreight Summit Poland in Warsaw. Expert opinions on the topic were shared, among others, by Marcin Witczak (Laude Intermodal), Volodymyr Demenko (Levada Cargo LLC), Bartłomiej Felczyński (DCT Gdansk), Dominik Landa (HHLA) and Maciej Cetnerowski (LTG Cargo Poland).

When discussing Ukraine’s position in global and European supply chains, both Witczak and Demenko accepted the harsh reality that rail cannot undertake the heavy duty of handling all Ukrainian exports. Specifically, Witczak explained that up to 70 per cent of Ukraine’s trade used to take place by the sea. When it came to general agricultural products and cereal exports, 90 and 97 per cent of them, respectively, were exported by sea ports in 2021. Only 11 per cent of the country’s total cargo was transported by rail.

On his behalf, Demenko underlined that “even half of Ukraine’s seaborne volumes are a huge challenge for European logistics to carry by rail”. He added that land “transport corridors are already on the verge of collapse,” and if problems are not resolved by boosting more sea exports, then “Ukraine will be unable to export anything next year”. Both highlighted frankly that rail is not the holy grail for Ukraine and that the logistics industry should be aware of that and move with realism.

Lack of equipment the main issue

On top of that, both experts stressed that looking for long-term solutions to integrate Ukraine into the European corridors and network could prove misleading. “Support is ineffective without sending containers and equipment to Ukraine” to facilitate loading and transhipment operations. Demenko also confirmed that total equipment shortages are one of Ukraine’s main issues overtaking infrastructure and border crossing terminals.

The unanimous arguments of the two experts underlined that the war in Ukraine is not over. Consequently, logistics companies and policymakers should focus on implementing short-term solutions that will help resolve real-time problems like insufficient equipment to carry Ukrainian cargo. The lack of equipment is also getting worse by the current energy crisis, and inflation skyrocketing wagon prices, said Demenko, but also by the unwillingness of European companies to send equipment to Ukraine for security reasons, added Witczak.

Get used to the reality

On another note, Dominik Landa urged the rail freight industry to accept the fact that the new reality logistics face is here to stay. He said that even if the war ends, cargo flows could take years to return to Russian Baltic ports like St. Petersbourg, for instance.

Cetnerowski added that a new reality caused by war is always negative” and that the industry needs to consider everything resulting from it. He specifically mentioned that the energy crisis is coming hand in hand with the war saying, “we do see a shift back to diesel. For intermodal connections, there should be special prices in traction energy to make it work”.

Bartłomiej Felczyński agreed with Landa and Cetnerowski’s remarks, while he accepted Witczak and Demenko’s notes that Ukraine needs instant help. However, he explained that DCT Gdansk cannot overlook the integration of Eastern Europe and Ukraine into its expansion plans. “We do not only plan our expansion based on the Polish market but the broader Eastern European market, including Ukraine.”

Like it or lump it, Ukraine is going to have to update, modernise & extend its rail system for the 21st century, even if exports by ship gradually return to pre-war levels. The fact that Ukraine was so dependent upon one form of export of grain etc for its revenue was surely a major influence on Putin’s decision to steal produce & put the south of the country to the sword.