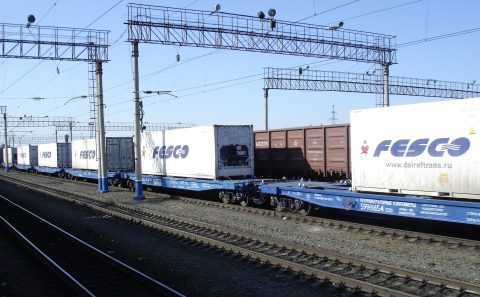 FESCO, the Russian intermodal transport operator, has moved record-setting volumes in the first half of 2022. Numbers have increased for both international and intermodal transport. The company has also registered a minor decrease in TEUs moved via the Commercial Port of Vladivostok.

Moreover, FESCO is strengthening its ties in the East with a new rail freight service connecting Russia with Vietnam. Just a few months ago, a new direct sea freight service between the two countries was launched by FESCO.

The figures for FESCO’s growth

The Russian company moved 144,000 TEUs on its international network during the first half of 2022. The figure signals a 21 per cent increase compared to the same period of the previous year. The transport of refrigerated cargo has also significantly increased, with 19,000 TEUs moved, a 35 per cent rise. This growth can be explained by the increasing number of goods transported by FESCO to South-East Asia and the Far East.

When it comes to intermodal transportation, FESCO registered a 10 per cent increase when comparing the first half of 2022 to the first half of 2021. 244,800 TEUs were in fact moved, while only 222,100 were transported in 2021 H1. This increase, according to the company, was caused by a larger fleet capacity. More specifically, 3,184 new units have been added to the container fleet as well as 1,723 new 80-foot platform wagons.

On the other hand, FESCO has experienced some issues in the Commercial Port of Vladivostok. The company has in fact seen a decrease in TEUs moved via the port, stopping at 345,000 TEUs, a 5 per cent drop compared to the first half of 2021. This decrease, according to FESCO, is due to international companies abandoning the Russian market in light of the recent geopolitical developments.

An example of FESCO’s increasing eastbound trains is the new rail freight service that the company offers, in collaboration with Russia Railways (RZD) between Russia and Vietnam. The first train left the Vladivostok Commercial Sea Port yesterday, 6 September, as the RZD’s Telegram channel claimed.

This new service will implement smart contracts, a technology that involves the conclusion of electronic contracts using digital security mechanisms. All the container-related operations will be registered in the RZD Distributed Freight Data Register system. This will allow customers to track all the stages of the journey, including the status of applications, the supply and inspection of wagons, and the departure and location of containers.

Apart from the service to and from Vietnam, FESCO plans to launch new multimodal routes between Vladivostok and Indonesia, India, Taiwan, and other countries of South-East Asia.