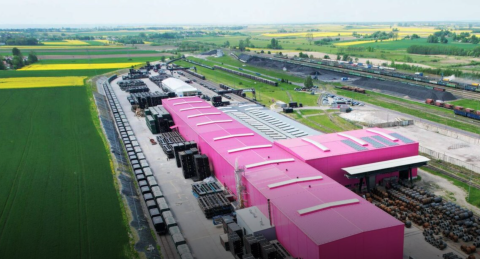 These terminals have helped Ukraine-Poland rail freight flow this year

In the past few months, rail freight between Poland and Ukraine has taken on a whole new role. Several terminals were added to the network to facilitate the new trade route this summer, such as in Mostyska, Zamość and Sosnowiec. These terminals have added much-needed capacity to the route.

Increasing capacity on the Poland-Ukraine railway network is high on the agenda at the RailFreight Summit Poland, which will take place in Warsaw on 7 & 8 September. The importance of these terminals will be presented by the parties involved, followed by a panel discussion about the potential of a transit route to the Baltic seaports.

This year, this rail freight network was one of the most viable export options for Ukrainian products such as grain and other agriculture products. This was true when the port of Odessa was not an option, but even as the port is now open, the rail route is considered top priority. Yet, the capacity of the lines is limited, and more facilities are much-needed.

Volodymyr Demenko from Levada Group is a logistics provider from Ukraine and one of the partners of the terminal in the Ukrainian border city Mostyska. Marcin Witczak from Laude Smart Intermodal invested in the aforementioned terminals in Poland. What they both have in common is that they are actively involved in the development of the Ukraine-Poland rail freight network.

Near the border with Poland, the Ukrainian Container Terminal Mostyska is a successful example of a new transshipment facility for rail freight between Ukraine and Poland. In July, it was opened for traffic by N’Unit and Levada Group, who have partnered up to develop a terminal network in Ukraine.

One of the main advantages is that it offers broad gauge and standard gauge, so that it is able to reload traffic moving between the east and the west. It has a capacity of 100,000 TEUs in the first phase, when the focus is on handling trains. Later on, the partners will focus on warehousing and other services such as reloading and packaging.

The terminal was designed and constructed with the intention to encourage Eurasian traffic through Ukraine. Although this traffic has now come to a halt, the terminal is perfectly suited to handle Ukraine-Europe traffic. It was originally scheduled to open in April this year, but finally saw the first trains running this summer.

Zamość and Sosnowiec in Poland

Laude Smart Intermodal has invested nearly 52 million Polish Zloty in the expansion and equipment of their terminals in Zamość and Sosnowiec, both of which are ideally situated to handle Poland-Ukraine traffic. Zamość is located on the broad-gauge LHS line, about 60 km from the Polish-Ukrainian rail border crossing Hrubieszow-Izov. Sosnowiec is located a little further west, closer to Katowice.

The terminal in Zamość was officially launched in June 2022, co-financed from EU funds.
Because of the broad gauge, trains from Ukraine can run up till the terminal without the need for transhipment. It is able to handle ten trains a day, allowing the shipment of much larger volumes of cargo than before from Ukraine, explains Witczak. “The new facility increases the handling capacity to 15 thousand TEU annually.”

The terminal in Sosnowiec already existed, but Laude Intermodal invested in in increasing the handling capacity. “This is in line with our long-term strategy for the development of regular scheduled container trains from Ukraine, Poland to Germany and European countries as part of our Time for Revolution Project”, Witczak explains.

In order for Poland to be perceived as the main logistics hub for Ukraine, not only high-capacity transport infrastructure and transshipment terminals are needed, Witczak adds. “Coordination and legislative measures at the government level are also necessary. It will create conditions for transport and logistics companies to organise deliveries of goods in a more efficient way – cheaper and faster. At the same time, it is necessary to change the approach to the transport technology itself.”

The discussion on how to increase Ukraine-Poland rail freight capacity will continue this week at the RailFreight Summit Poland, where both Demenko and Witczak will be present. Do you want to join the discussion? Registration for this event is still open, but seats are limited.