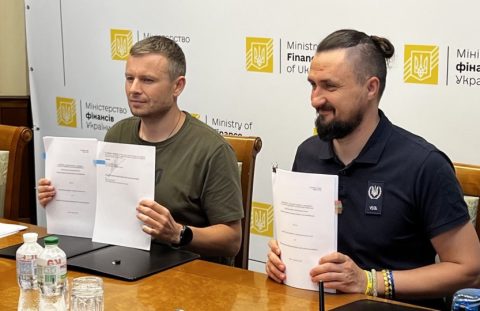 The European Bank for Reconstruction and Development will grant an additional 98,8 million euros to the Ukrainian Railways in an attempt to resolve urgent liquidity issues and ensure the seamless continuation of cargo and passenger services.

This is the second support scheme granted by the EBRD to the Ukrainian Railways (Uz). In June, the Ukrainian transport company received 50 million euros under the European Union’s European Fund for Sustainable Development (EFSD). This time, the “repurposing of 98,8 million euros”, as the EBRD framed it, will take place under the bank’s resilience package for Ukraine and neighbouring countries.

When using the term ‘repurposing,’ EBRD means just what it says. In simple words, The bank was supposed to provide the Ukrainian Railways with a loan of 150 million euros as part of a railway electrification project. However, under the war circumstances, the loan money was indeed repurposed for more urgent purposes.

As a result, the first 50 million euros out of the 150 were administered to the Uz last June to boost the company’s liquidity. The remaining (almost) 100 million euros will be allocated to Uz now, after the agreement signed between EBRD, Ukrainian Railways and the Ukrainian Ministry of Finance on 1 September.

Signed €100m agreement with @EBRD and @MinFin_Ukraine. That’s already second financing project with #EBRD since the beginning of the #RussiaUkraineWar. Thanks for #StandWithUkraine to #EBRD and @MatteoPatrone3. Thanks for supporting #railways to @OlKubrakov and @SergiiMarchenk3. pic.twitter.com/UL3kNEMuNb

All eyes remain on Ukraine

The European Union and affiliated institutions keep pushing support packages to Ukraine to relieve it from the war effects but also start rebuilding it, or at least predefine how the country’s rebuilding will take place in the future. ERDB’s financial injection to Uz is one aspect of how the EU’s support towards the country shapes.

However, there’s more than that since Ukraine seems to be Europe’s focal point for developing the TEN-T network and fund allocation. As RailFreight.com reported on Friday, 2 September, Malaszewicze in Poland is gradually losing its traction for investments. What used to be Europe’s core network is now seen as a ‘regular hub’ on the east-west corridor.

On the other side, Ukraine and its border crossings with Poland are gaining the utmost importance and priority when investing and building new infrastructure. Consequently, a shift of balance is happening that could probably result in a different power state after the war ends, with Ukraine getting all the attention, Belarus excluded from any EU investment and infrastructure building plans and Poland losing its position.

Belarus was already excluded from the cooperation agendas months ago. However, Poland faces a new and gloomy reality. With fewer funds directed to Malaszewwicze and the country generally, the investments taking place are insignificant compared to what they used to be. It only remains to see how things will develop after stability, partially or entirely, returns.