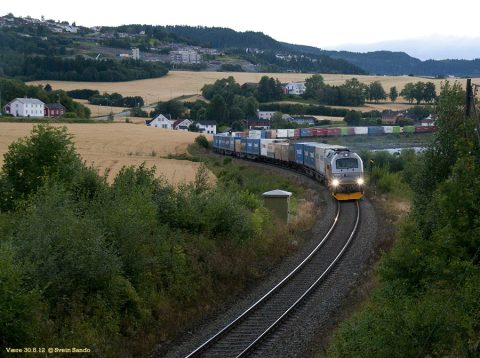 Rail freight in Norway has been constantly growing over the past few years, as Bane NOR, the Norwegian infrastructure manager mentioned. The first half of 2022 saw an eight per cent increase compared to the same period last year. In addition, many Norwegian companies have already applied to rise their rail freight traffic by 30 per cent, compared to 2022. However, these applications need to be reviewed by Bane NOR to check if the current capacity allows for such a leap.

Additionally, more companies are embracing rail freight in Norway. “In the past four years, the number of carriers has doubled,” said Bane NOR. “One double track railway also has the same capacity for transporting goods as a 15-lane motorway,” the company added, claiming that building more roads at the expense of forests and topsoils would negatively impact the environment as well as self-sufficiency, especially in Eastern Norway. Increasing rail freight traffic would lead to safer roads too, as Bane NOR stated, pointing out that every train takes 30 trucks off the road.

Bane NOR solutions for bottlenecks

Norway is facing additional challenges when it comes to rail freight. “Passenger trains and freight trains run on the same railway, and large parts of Norway’s railways consist of single tracks,” the Bane NOR highlighted.

This is a problem that concerns both speed and capacity. Freight trains run slower than passenger trains but are impossible to overtake on a single track. “With long crossing tracks and double tracks, we can put in more freight trains without bursting the capacity,” said Oskar Stenstrom, director of freight at Bane NOR.

To solve this issue, Bane NOR is building double tracks in South-Eastern Norway. The project will connect Drammen with Tonsberg and Moss. At the same time, the company is also collaborating with other actors to create sidings running directly from factories to the railway network.

Are Kjensli, managing director at NHO Logistikk og Transport, suggested that freight trains being prioritised over passenger trains at specific times of the day could be an effective solution for the increasing demand for rail freight in the country.