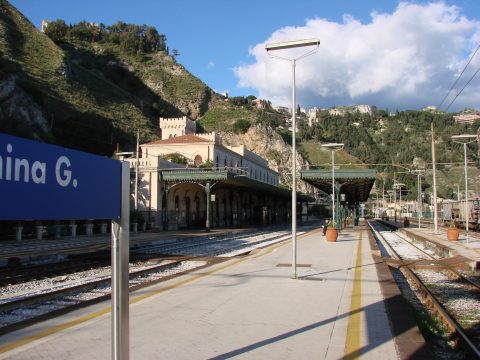 Rete Ferroviaria Italiana (FS Group) started doubling the tracks on a section of the Palermo – Catania – Messina line, in Sicily. When finished, the projects will allow faster freight trains to travel on new European standard tracks

Sources from FS told RailFreight.com that the projects should be completed by 2029. Moreover, there will be no traffic interruption during the works

The activities to double the tracks concerns the Fiumefreddo-Taormina/Letojanni and the Taormina-Giampilieri lines, of which the total investment is 2.3 billion euros. Transit time from Messina to Catania is expected to drop by 30 minutes, almost a third of the current one. The works are expected to boost both passenger and freight rail transportation.

For the Fiumefreddo – Taormina/Letojanni line, the investment amounts to 872 million euros. There will be the construction of a new 15 km-long double rail track. Most of the line, 11 km connecting Fiumefreddo and Taormina, will be a tunnel. There will also be a connection to the Letojanni station. The works will be overviewed by the Messina Catania South Lotto Consortium.

Concerning the Taormina – Giampilieri line, the investment will be 1,43 billion euros. 28 km of double track line will be built connecting the two Sicilian towns. 25 km of the line will be a tunnel and the project is overviewed by the Messina Catania North Lotto Consortium.

The two consortiums were established by Webuild Italia S.p.A., Impresa Pizzarotti S.p.A., and Partecipazioni Italia S.p.A. Webuild Italia is a company that designs, builds, and operates large complex infrastructures, including railways. Impresa Pizzarotti is a construction and civil engineering company from Parma, and Partecipazioni Italia builds rail and subway lines.

Good – for Sicily…
However for EU…, mantra…, “Scan Med” – and current, decisive cementing, at standards, most vulnerable…, simply is obstructing, mere goal of EU…
Sustainably, bottlenecks of railways shall be outed!
(Railways is a device, not Goal!)
Added capacity and utilisation of existing shall be top priority!
Goal of EU, nearness to Market, duly has to be awarded infrastructure, requested!

Well ahead of any bridge discussion this was much needed investment