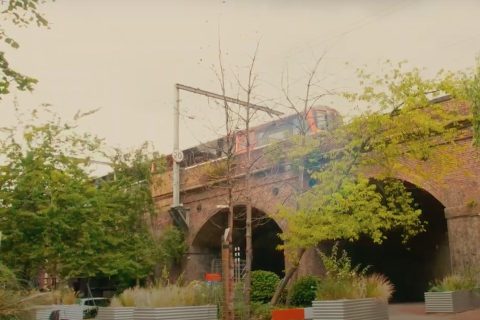 Plans for a London High Line

Camden is in the market to join the Highline family. Freight operators in London may be at odds with the plan, but a well-organised lobby group would like to see disused tracks reborn as an urban park to rival the best in the world. The proposals however are at odds with Network Rail ambitions to provide additional capacity for growing freight traffic across the north of London.

Network Rail has put forward proposals to reinstate dismantled tracks in the north of London, through the inner suburb of Camden. Their proposal would reinstate a third track and platform through Camden Road passenger station. The additional capacity provided would greatly increase flexibility and pathing options for freight across the city.

The fashionable Camden district in London, famous for its market and its music, is also a critical railway hub for freight, passenger and metro services. Even the famous Roundhouse performance venue has railway heritage – it’s a former locomotive depot. The Network Rail plans for Camden would accommodate freight traffic, particularly intermodal growth, alongside greater passenger demand.

A well-organised lobby group, Camden High Line, has different ideas. They would like to use 1200 metres of the trackbed to add to the area’s green space by reusing the route as London’s own linear urban park. The inspiration comes from already realised ambitions along the Parisian Bastille Line and the original Highline in New York. From closer to home, there is already a scheme for a temporary park in Manchester, mainly using bridge structures over the city centre.

Converting disused railways into linear parks and paths is not a new concept. In the UK, decades of rationalisations have left a vast legacy network, and that has captured the public imagination. “Walking Britain’s Lost Railways presented by Rob Bell” is among the country’s most popular television shows.

Urban railway walks are much rarer. Most of Britain’s cities had an over supply of infrastructure, due to unrestricted nineteenth-century competition. However, most of the closed railway estate has proved irresistible to developers. The balance of what remains is difficult to repurpose, such as those tracks that parallel live lines, just like the Camden High Line.

The High Line project has an equally high level support. ”This innovative project has the potential to become a real asset for Camden”, said Sadiq Khan, the Mayor of London. “[This] is a great example of a local community taking an idea and garnering support in order to make it a reality. I look forward to seeing it develop.”

Network Rail say that London’s rail freight requirements over the next thirty years demand a multi-faceted approach, which includes extra infrastructure. “This strategy aims to set out a high-level approach for this to be achieved”, says their report with an prophetic choice of words. “Presenting options for enhancement schemes should be highlighting the importance [of] ongoing development of rail freight markets.”

Camden High Line hope that train-spotting from the park will be a major part of the attraction. Perhaps an accommodation can be reached with a moderation of all plans concerned, and some of those trains will be freight too.

A park such as one similar to the Highline in NY would be totally inappropriate at the venue stipulated near Camden, as adjacent lines are used continuously. The NY “park” which is great was taken over & developed from a totally disused line over buildings, roads/streets. Not the same at all.