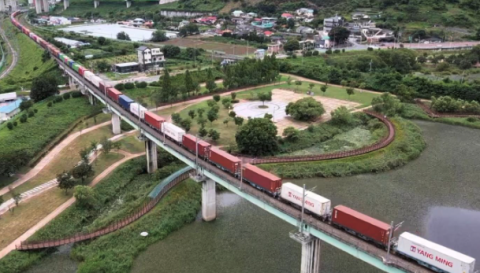 KORAIL, the South Korean national railway operator, has successfully conducted commercial test operations of a 50-car, 777-meter-long freight train. Currently, KORAIL operates 33-car-long freight trains. With the implementation of 50-car-long ones, transport capacity can increase by 52 per cent. The operations were carried out on the Gyeongbu Line, between Seoul to Busan.

The train left Seoul, in the North of the country, on 19 July at 5 am and safely reached Busan, in the South, around 11 am, running over 400 km. Long freight train operations are expected to start in the first half of 2023, after analysing the data gathered through the test operations.

KORAIL points out that the train is double the size of a high-speed passenger train and that it is the first time that such project has been launched in South Korea. Being able to operate long freight trains, moreover, would allow KORAIL to connect South Korea’s railways to transcontinental ones, extending the operating distance of railways logistics.

With these tests, the company expects to meet the environmental goals that the government has set out, namely the reduction by 37.8 per cent of greenhouse emissions and carbon neutrality by 2050.

KORAIL has some obstacles to overcome

Because of its geographical location and size, South Korea has relatively short railways, which led KORAIL to take a “somewhat passive position in developing long freight trains to carry out mass freight transport for long-distance”. Moreover, railway lines and stations in South Korea are over a century old, making it impossible to operate long freight trains.

According to the company, “the test operation of the long freight train has been implemented to come up with a self-resilient strategy to overcome continued operating loss due to COVID-19”.

KORAIL is in fact currently losing over 150 million euros per year. One of the solutions would be to strengthen the transportation system so that it could transport 64 freight cars at a time. The tests of the 50-car-long train can be therefore considered as the first step “to overcome this chronic deficit structure”.

Still, short, heavy trains are better off, than long…